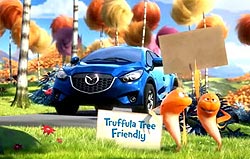 The Campaign for a Commercial-Free Childhood (CCFC) has launched a campaign urging parents and others to boycott purchases and any support of products/services being tied in with Universal Pictures’ new Dr. Seuss "The Lorax” movie.

CCFC contends that the messages of “reducing consumption and promoting conservation” in Dr. Seuss’s 1972 book classic are being exploited to push consumption messages to kids.

The nonprofit is using PR, including an emailed press release, to encourage consumers to sign an electronic pledge on its site and pass it along to others via Facebook and Twitter.

The pledge reads: “I will not support or purchase any of ‘The Lorax’’s commercial tie-ins. It is both cynical and hypocritical to use a beloved children’s story with a prescient environmental message to sell kids on everything from SUVs to pancakes. The Lorax in Dr. Seuss’s classic children’s book has more integrity than his current incarnation as the animated darling of Madison Avenue. If the original, notoriously reclusive Lorax ever agreed to appear in a film, he would say a resounding ‘NO’ to any commercial tie-ins. He would help children curb their consumption instead of promoting a slew of ‘greener’ products. He would tell corporations to stop bombarding kids with materialistic messages. He would never immerse children in the false corporate narrative that we can consume our way to everything, from happiness to sustainability. My family will celebrate the Lorax’s timeless message by enjoying the classic story-- shunning all Lorax-themed merchandise and promotions.”

CCFC is not alone in criticizing the tie-ins with the movie, which will be released on March 2 (the anniversary of Dr. Suess’s birthday). Talk show host Stephen Colbert satirized all of the movie’s product tie-ins, but said his “favorite” was Mazda.

Mazda’s Lorax-themed efforts, in particular, had already been generating substantial criticism from environmental bloggers and others. For instance, Ed Gillespie, co-founder of London-based sustainability communications agency Futerra (which wrote a much-referenced guide to spotting/avoiding the creation of “greenwashed” campaigns), wrote that the Mazda Lorax campaign managed to “floor” him with “its crass chicanery.”

MemeMachine.com wrote that Mazda has “driven headlong” into “the latest punch-bag for political and talk-show hosts” ranting at “what is perceived to be the sinister exploitation of children,” with “a 45-second spot that’s already earning the accolade of ‘Biggest Greenwash of the Century.’”

Other petitions are also out there. One on Change.org, to be sent to the president/CEO of Mazda North American Operations, currently showing 75,000 signatures, contends that the Mazda ad is “dishonest and deceptive” and calls for Mazda and Universal Pictures to “immediately remove any advertising that associates ‘The Lorax’ with automobiles from all forms of media: print, television, radio, movie trailers, the Internet, merchandising, etc.” (This petition and CCFC are both using a #SaveTheLorax Twitter handle.)

Meanwhile, on Feb. 29, The Washington Post published a piece reporting on an NEA/Mazda “Read Across America” tour stop in one school in Alexandria, Va., with the lead: “The Lorax -- that squat orange creature Dr. Seuss created to speak for the trees -- is now hawking SUVs at elementary schools across the land.”

According to the article, the Mazda rep accompanied a Lorax-themed video with the presentation of a $1,000 check to the school, to be used for library books, and “then told the kids they could help raise up to a million dollars for other schools’ libraries -- and qualify for a sweepstakes entry (trip for four to Universal Studios). All they had to do was persuade their parents to go to the nearest Mazda dealership for a test-drive.”

Each school visited in 20 cities around the U.S. is receiving a $1,000 donation from Mazda along with the request to join in the test-drive-based fund-raising effort, reported the Post.

CCFC associate director Josh Golin is quoted as describing the program as “one of the most outrageous examples of any school advertisement program I’ve ever heard of.”

But an NEA spokesperson defended the program, which could generate up to $1 million in donations for financially strapped public schools. “The ‘ask’ we are making is to test-drive the car, not necessarily to buy it,” the spokesperson wrote the Post in an e-mail. “Once people learn that by simply test-driving a car, they can raise $25 for their public school library and libraries nationwide, they gladly participate. We’re ‘marketing’ a great cause that will have a direct benefit to students.”

While Mazda to date appears not to have made any public response (including to Gillespie’s request for comment), Universal Pictures, in a Feb. 8 press release announcing the movie’s “support from organizations and businesses with a common goal of natural preservation,” stressed that it had partnered with the U.S. Environmental Protection Agency to “help engage the youth of America in environmental protection.” Specifically, a Universal/EPA “Team ENERGY STAR” initiative includes a PSA and other youth-targeted educational materials.

As of the release date, there were 69 partners, globally totaling $58.4 million in media value.

“By bringing Dr. Seuss' messages from ‘The Lorax’ to consumers, [Universal Partnerships & Licensing] and its partners hope to help empower consumers, young and old, to make more informed choices for their families and the environment, as well as support smarter, environmentally-conscious choices in everyday life,” the release stated.