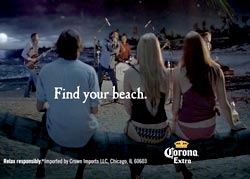 Corona Extra is striving to evolve the “Find your beach” tagline that the brand has been using since 2010.

Two TV spots and out-of-home advertising aim to strengthen the connection between the physical beach and the beach “state of mind.”

Corona Extra’s 2012 out-of-home advertising depicts beaches in unexpected places -- in a city bar, on an urban rooftop or on a snowy mountaintop.  Four executions designed to broaden brand perceptions and expand drinking occasions will break in May on taxi toppers, bus shelters and other outdoor displays in 10 key U.S. markets including New York City, Chicago, L.A., San Francisco and Washington, D.C.

“Spotlight,” the first new TV ad of 2012, will debut during NBA and NCAA basketball programming.  “Spotlight” is set under the stars on an iconic Corona Beach, where the indie band Everest emerges from the dark to welcome an intimate party of three before launching into their hit single “Let Go.”

The spot then cuts to a crowded club where the three friends toast one another and closes with the band playing a private moonlit performance on the picturesque Corona beach.

“Taxi,” a spot scheduled to debut this summer, opens with a cab rolling down a Corona Beach setting at sunset, trailed by a rain cloud. As the passenger opens the taxi door, the ad cuts to a rain-soaked cityscape. He then dodges raindrops across the street and into a bar where a group of his friends await to hear the results of an important meeting. Upon hearing the good news, they toast his success and return to the beachside bar.

The campaign resonates with current consumers while helping connect with new conquests, said Jim Sabia, chief marketing officer, Crown Imports. “As our lives get busier, we realize the importance of taking a step back and relaxing to keep us feeling positive and upbeat.,” Sabia said in a release. “Finding these moments -- or ‘beaches,’ as we call them -- wherever you are is what Corona Extra is all about.”

Corona’s movement off the beach began in 2010 with the groundbreaking TV spot entitled, “Moments.”  This spot marked the first step toward expanding consumers’ beach state of mind by inviting them to experience the brand in new settings and challenging them to “Find Your Beach.”

In 2011, Corona continued the off-the-beach shift with three new ads: “Flight,” “Commuters,” and “Snow/Sand.”  Each spot helped remind consumers that Corona is appropriate for every occasion and that “the beach” is also a state of mind.