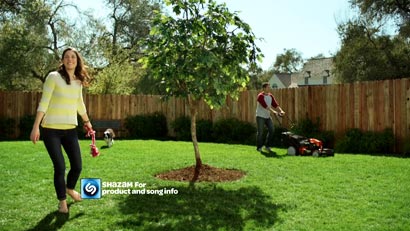 Outdoor lawn equipment company Troy-Bilt is taking a hard look at the virtues of so-called "companion TV" viewing, the increasingly prevalent practice of watching TV while engaging with smartphone or tablet content. This is also called -- perhaps incorrectly -- social TV, unless people are using those second-screen devices to connect with other people about the show they're watching.

The new Troy-Bilt effort makes music-ID app Shazam the bridge between the TV and the mobile Web to promote two newly launched Troy-Bilt yard products plus one existing product line. The effort, via Marcus Thomas, is the Cleveland firm's fourth consecutive spring campaign for the manufacturer.

The TV component of the campaign follows a yard enthusiast’s life from young man planting a tree to young married guy mowing under the tree using a walk-behind, to young dad who now rides on mower while mom gardens and kids play in the leaves, to an older dad using Jump Start yard tools while kids help. “Saturday after Saturday, season after season,”the V.O. says, “Troy-Bilt is built for life.”

The ad has Luce frontman Tom Luce singing “World Goes By” as the ad runs. An on-screen icon tells viewers that they can use audio recognition app Shazam to “tag,” or identify, the tune. When viewers do so with their mobile devices, they go to a branded in-app experience about Troy-Bilt products with links to a Lowe's store locator. It also links to Troy-Bilt’s Web site and Facebook pages, and also to a 99-cent iTunes download of the extended 2:24 soundtrack.

The campaign, targeting 26- to 49-year-old homeowners and DIYers, runs on cable networks HGTV, TNT, USA, History Channel and The Weather Channel, with supporting Flash, rich media and pre-roll banners on sites including Weather.com, WeatherBug.com, HGTV.com, and DIY.com, plus on ad networks Tremor and AdRoll.