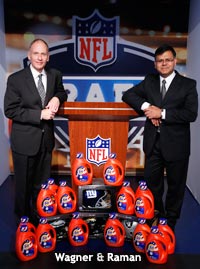 As part of Procter & Gamble's corporate association with the National Football League, the Cincinnati-based CPG giant's Tide laundry brand will be "Official Laundry Detergent of the NFL." The multi-year deal, starting with the 2012 NFL season, includes sponsorship of all 32 NFL teams.

Procter & Gamble's two-year-old corporate-level association with the league involves several brands, but Tide is the first to sign individual deals with all NFL teams, making it one of only two brands -- Gatorade is the other -- to have done so. As part of the deal, Tide gets to use NFL branding across its portfolio. Tide also gets to use logos and do specific marketing for the individual teams.

Sundar Raman, marketing director for North American Fabric Care, tells Marketing Daily that the partnership is a good fit for Tide because the NFL is the number-one sport for women -- ahead of the Olympics, in which Tide is also present; and also because the 32 teams use the product to clean players' uniforms. "And the NFL is the number-one sport. We have 100 million customers so it's a huge opportunity for us," he says.

Raman says the company hasn't developed marketing plans yet, but that Tide is "looking to do a completely integrated program across multiple touchpoints nationwide. The NFL has a growing base of women as fans, and want to make sure we are part of that."

But he adds that while women are becoming a larger portion of the NFL fan base (perhaps reflected in the fact that the league now sells team- and league-themed lines of womenswear and apparel), men are buying laundry products more.

Tide got a big boost, perhaps inadvertently, with that demographic in February when the detergent got big TV play as the cleanser to rid the Daytona 500 track of spilled fuel after Juan Pablo Montoya's crash. Tide used to sponsor Darrell Waltrip's "Tide Ride," and two years ago sponsored Kevin Harvick in the Camping World Truck Series. But while the Tide target isn't on a car right now, the brand actually made a TV spot this year that aired during race coverage about its success in cleaning up the mess at Daytona.

"More men get involved in laundry and caring for household and kids now," says Rama, who pointed out that Tide launched its new Tide Pods products via a sponsorship of this year's Academy Awards.

Raman says NASCAR and the NFL share a common tie to Tide. "We were blown away by the number of teams already using Tide, and it was the same with NASCAR, so it's a huge testament to the brand. That's the power of it. The best ideas are ones where we don't have to force something uphill."