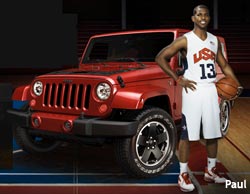 Jeep is rolling out grass-roots activation programs around its sponsorship of 2012 USA Basketball. The automaker, whose quintessential vehicle, Wrangler, is "Official Vehicle of USA Basketball," is adding exhibitions, and experiential elements to its Rubicon-sized "Power Within"  ad push for the team.

The grassroots “Power By Design” event centers on a challenge where participants try to sink 12 consecutive free throws in a regulation basket. With each basket, a design element of the Wrangler is revealed. Thus, the first person to assemble the virtual version of the Wrangler gets to play "J-E-E-P" with Carmelo Anthony, as well as a trip for two to Las Vegas to attend a USA Basketball Exhibition game.

Jeep is also activating against USA Basketball exhibition games, including the upcoming game on July 16 in Washington, D.C. The brand has ride-and-drive elements and a brand-heritage themed exhibition where people can walk through a time-line of the brand's 70-year history. Jeep joins 10 other sponsors, including Gatorade, American Express, and Cisco Systems.

Jeep is using the sponsorship to tout its limited-edition version of the Wrangler, the 2012 Jeep Wrangler Unlimited Altitude, with an integrated campaign featuring 2012 Team USA hopeful Chris Paul of the L.A. Clippers, who was a USA Basketball team member in 2008. He appears in advertising and video vignettes about the partnership and the Olympic team. Jeep's AOR, Southfield, Mich.-based Global Hue, oversees the campaign. The Wrangler version of the Altitude model follows Grand Cherokee, Compass and Patriot versions of Altitude models.

Wrangler had a strong sales month in April, helping the Jeep division post a 19% lift in sales volume for the month, making it Jeep's best in five years and 24th-consecutive month of year-over-year sales gains. The company said Wrangler also set its own sales record for the month, with a 35% sales gain. The Grand Cherokee, which won an AutoPacific/Autobytel vehicle-satisfaction award, had its best April in seven years.