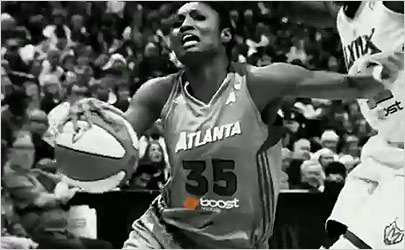 Boost Mobile, the first-ever marquee partner of the WNBA, is launching a new TV spot based on a new campaign entitled "It's All About the W." The ad first airs on June 23, during the Chicago Sky versus Minnesota Lynx game. The motivational ad touts Boost Mobile and the WNBA workiing together to motivate, blaze new trails and challenge conventional thinking.

This new spot features in-game footage, with a voiceover talking about inspirational words that begin with "w." It will air during nationally televised WNBA games on ESPN and ESPN2 throughout the season, and the spot will be updated in the upcoming weeks with additional WNBA game footage, per a joint release on the campaign.

Although Boost Mobile stands alone as Marquee Partner for the 16th season of the women's professional hoops, the league has 18 brands signed on as sponsors at more traditional levels of activation. Among them are Coca-Cola, HP adidas, Bacardi, AmEx, and EA sports.

The WNBA last season saw big increases in attendance, sales, sponsorships, and ratings. WNBA games on ESPN2 last year saw a 5% increase in ratings, with the All-Star game getting a nearly 50% increase versus 2009. Web site traffic was up 11% and the league's online streaming page at WNBA.com saw a 55% increase in viewership. WNBA teams added eight marketing partnerships last year, including the deal with Boost.