Art.com: All About The Art 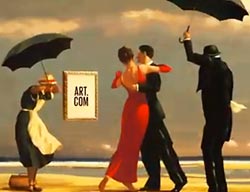 One of the survivors of the early dot-com era (in name, at least), Art.com is looking to reintroduce itself to consumers via a new advertising campaign that looks to explore how people can make well-known art personal.

The new campaign, which employs the theme “We Are Art,” is based on the insight that using a piece of art for room decoration does more than take up space on a wall; it adds character to the entire room. The 30-second commercial from creative agency Mekanism takes viewers through the looking glass of a piece of art into five famous works of art (including pieces by Matisse, Lichtenstein and Eisenstaedt) before coming back out into a living room and introducing the tagline.

The television commercial will be supported with print and digital advertising social media and extensive blogger outreach, according to the company.

In addition to the marketing campaign, the company has introduced a newly redesigned Web site that gives consumers more access to art available for purchase, and tools to help them find what they’re looking for. The new site includes curated collections from “Inspiring Insiders” such as interior designers Charles de Lisle and Susanna Salk; an area where people can create their own galleries of art they love (along with social tools to share those with others), and a redesigned shopping area.

Art.com was founded in 1998 by Getty Images as a way to sell art directly to consumers via the Internet. After the dot-com bubble burst, Getty sold the domain to AllWall.com, which was in the business of selling posters and prints (such as movie one sheets and stills) to the public. Competitor Allposters.com bought the domain in 2005 and rebranded itself as Art.com Inc. in 2006.

“Two years ago we set out on a mission to alleviate the risk and anxiety most people feel when buying art and forever change the way art is experienced and consumed,” said Geoffroy Martin, CEO of Art.com Inc., in a release. “From the moment shoppers browse our new site to the day their art is delivered and hung on their walls, we have one goal in mind: to surprise and delight every step of the way. I'm proud to say that the new Art.com does just that.”

ad campaign, blogging, digital, online, print, retail, tv
1 comment about "Art.com: All About The Art ".
Check to receive email when comments are posted.
Next story loading