Get Ready For Retail 'Showrooming' 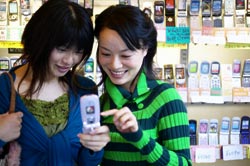 The retail world is ready for an upheaval, and consumers know it. The question is, are the retailers ready for it?

According to a survey conducted by Capgemini of 16,000 shoppers around the globe, consumers expect the traditional model of brick-and-mortar stores carrying inventory to be purchased immediately to take a backseat to a new idea of “showrooming,” in which people will visit stores to view products and then order them through their smartphones. The survey finds that 60% of these consumers expect the practice to be commonplace by 2014. However, half of those surveyed said most retailers are not consistent about the way they present themselves across different channels.

“The retailers need to seriously think about their strategy,” Brian Girouard, North American consumer products and retail leader for Capgemini, tells Marketing Daily. “I think the key is the retailers take this trend seriously to develop an offensive and defensive strategy around showrooming.”

As they develop a strategy that seamlessly integrates shopping across online, social, mobile and physical channels, these retailers will need to truly understand their customers’ expectations, Girouard says. For instance, Internet and mobile shopping is far more commonplace in developing markets than it is in mature markets: 80% of survey respondents ranked the Internet either important or very important to shopping, compared with 64% in mature markets. Similarly, emerging markets have more digital-savvy shoppers (72% of respondents from India and 69% from China were more likely to purchase more products in a single online transaction, compared with 31% of respondents in the U.S.).

“People in the developing markets are integrating their mobile phones more aggressively into their lifestyles, bypassing a whole set of behaviors and going directly to digital,” Girouard says. “If you’re looking to expand into emerging markets, [you] need to think of a digital strategy even more than a physical strategy.”

Meanwhile, retailers in all markets need to understand the many different digital shopper profiles, which can range from “Digital Shopholics,” who are early adopters who use the latest technology, to “Rational Online Shoppers,” who prefer the Internet channel, but have little interest in social media or shopping apps. Other categories include: “Occasional Online Shoppers” (who tend to be older and shop online infrequently), “Value Seekers” (who are more price sensitive and less interested in the online channel) and “Techno Shy Shoppers” (who tend to stay away from the digital channel altogether).

“Digital shoppers are not loyal to any one particular channel; they’re loyal to the overall journey,” Girouard says. “The retailer needs [to create] an overall integrated experience for their consumers. It’s not enough to satisfy them in the store, they have to satisfy them in all aspects of the journey.”