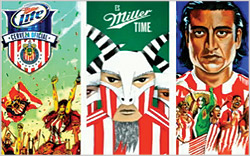 Miller Lite is asking fans for help in shaping the brand's next campaign aimed at Hispanic consumers.

The company is the official beer sponsor of the Mexican soccer team Club Deportivo Guadalajara, widely known as Chivas.

Consumers will be asked to choose one design from eight pieces of fan-created artwork that displays the camaraderie and passion associated with Chivas, the most popular Mexican soccer team.

The brand also developed a Facebook app that is accessible via Facebook.com/MillerLiteLatino, where people can vote for the artwork they believe expresses the nature of the Miller Lite and Chivas partnership.

The artist with the most votes will help shape the 2013 Miller Lite Chivas marketing campaign, as well as win up to $10,000 and an Adelante U.S. Education Leadership Fund scholarship worth $5,000 to be applied toward additional schooling.

Each week through Oct. 1, consumers can choose between two designs. In a bracket style contest, based on consumers' votes, pieces advance to the next level of the competition. The artists will also be featured in short promotional videos explaining the inspiration behind their work and what "It's Miller Time" means to them.

Miller Lite collaborated with Chicago artist collective Momentum Art Technologies to bring the design contest to life via a large-scale mural that was filmed and produced into a video that will be hosted online.

The mural and video demonstrate the camaraderie that Chivas fans experience when combining their favorite team with their favorite beer, and encourarge legal-drinking-age consumers to visit Facebook.com/MillerLiteLatino to vote for their favorite design.

Miller Lite became the official beer sponsor in the U.S. of Chivas, one of Mexico's most followed clubs in the Primera Division, in 2010.