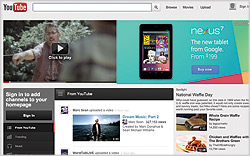 The Summer Olympics bolstered display advertising across the home pages of the major Web portals in June and July. Advertising related to the Games -- spanning July 27 to August 12 -- accounted for 10% of total observed ad units on the home screens of Yahoo, AOL, MSN and YouTube in the first half of the third quarter, according to the latest display ad-tracking report from Macquarie Equities Research.

Still, the study found that display trends were essentially flat from a year ago, based on ad formats used. Overall, 38% of home page ads were oversized/custom units, up from 36% for the same period a year ago, but down from 44% in the first half of the second quarter.

Looking at ad categories, financial services and media were the biggest verticals in the first half of the current quarter -- accounting for 20%, and 17%, of home page ads, respectively. Automotive was another strong contributor, representing 14% of ads. The Olympic-related ads were spread across a number of categories.

Display advertising was mostly stable for each of the Web portals analyzed, with YouTube remaining the strongest of the group. More than half (56%) the ads sold on the Google-owned video hub were of oversized/custom variety, up from 50% a year ago, thanks to its signature masthead unit.

Media and entertainment campaigns again dominated, accounting for more than half the ads on YouTube. But CPG got on board, making up 12% ads, compared to none a year ago or in the first half of the second quarter.

For Yahoo, sales of custom branding units sold increased slightly to 35% from 32% a year ago. The study also noted sell-through of Yahoo's log-in page ad slot rebounded in the first half of Q3 to 74%, on par with all-time highs. However, Macquarie analyst and report author Ben Schachter said it is difficult to say how much lift is a result of discounting.

Another positive sign for Yahoo was that the proportion of purely brand-focused advertising was 53% -- up from 33% a year ago, and from 29% in the first half of Q2.

The picture was more mixed for AOL. Custom ad units were up slightly from a year ago to 19%, but still well down from 32% in the April to mid-May period. AOL had more purely brand-focused units (32%), but also an increase in direct-response advertising, up nine percentage points to 35%.

Amazon also had mixed results, with its share of brand-focused advertising up to 35% from 24% in the second quarter. But the proportion of standard rich media advertising dropped from 74% to 58% in the first half of the third quarter. Only 3% of ads on the Amazon home page were custom/oversized units.

MSN saw marked improvement, with custom units accounting for 32% of ads sold compared to 13% a year earlier, and brand advertising rising to 38% from 21%. The site also had a corresponding drop in lower-quality, direct-response advertising to 12% from 29% a year ago and 24% in the first half of Q2.

Microsoft this week announced it is rolling out a series of multichannel ad units, including a digital circular-style format exclusively for MSN.