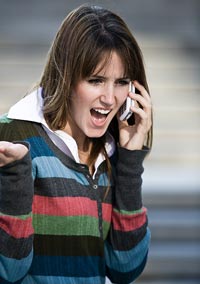 Mobile phone users are likely to become vocal and active detractors if they have a negative customer experience, according to a global study by the Chief Marketing Officer (CMO) Council.

Only 34 percent of 1,660 mobile subscribers surveyed around the globe in the second quarter of 2012 are loyal to their carriers and have stayed with their current communications service provider for more than five years.

According to the Ricoh-sponsored study, dubbed "What's Critical in the Telecommunications Vertical," 41% of mobile phone subscribers say they will lodge a complaint about a poor experience, 36% will cancel their service, and 29% will tell everyone they know about the incident.

Only 29% of those polled across all age groups characterized themselves as loyalists. In contrast, a total of 41% of respondents said they were either apathetic, on the fence, or just about gone when it comes to the relationship with their mobile service operator.

High service plan costs contributed to 48% of departures, a better deal with more all-inclusive options seduced 26% of defectors, and poor quality of service -- such as dropped calls or bad reception -- eroded another 23% of subscribers.

"While they can't live without their mobile devices, they certainly aren't hesitant to vocalize their dissatisfactions and express their freedom of choice in selecting another service provider," Miller said in a release.

Hidden fees (21%), bad service or network speed (17%), and high data or text costs (17%) topped the list of complaints. A surprising 56% of respondents fail to see equitable value to cost or are unsure of the fees they pay in proportion to the service they receive.

Service providers seems to be leaving money on the table, as 41% of consumers had issues regarding how well they were notified or informed about other products or services. While 36% of consumers say they will cancel their service after a negative experience, 29% believe their carriers simply won't care about their defection.

"Consumers are looking for assurance that their longstanding loyalty will be repaid with service and relevant communications instead of paying high fees to receive enhanced Web services," Miller said.

As part of its joint study with Ricoh, the CMO Council also surveyed 147 marketers at communications service providers (CSPs) worldwide.

Most appear to be focused on better segmenting, targeting, communicating, and delivering service to their customers. There is a keen awareness among those surveyed for the report that their subscribers want lower-fee plans with higher-touch, personalized service, yet a majority of marketers in these organizations still feel that technology innovation and advancement will satisfy subscribers and grow loyalty.

Ironically, only 13% of consumers described themselves as technology fiends, eagerly awaiting new innovations to secure their loyalty.