Kia Brings The Hamsters Back For Soul 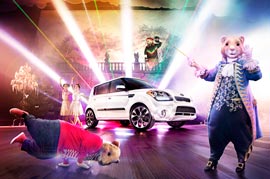 When it comes to furry little animals, the big challenge for Kia these days is not so much how best to exploit the Hamsters (its now-famous mascots for the Soul compact crossover), but how best not to exploit them.

After all, the anthropomorphic mammals have been that rare agency creation that crosses over -- and therefore, has the potential to wander away from Kia's cage. Michael Sprague, Kia Motors America's EVP and chief marketer, confesses that they have to be restrained, as he's gotten some pretty wild offers from movie producers and others who see big potential for the crepuscular comedians.

"We have been approached. We have had producers saying, 'We have an idea to make it into a movie,' and every time we have said, 'No.' We don't want them to be overexposed; it's too important for us and too iconic for the brand." He tells Marketing Daily that like the groundhog, the hirsute scene chewers make only one big media appearance per year before scampering into the comparative shade of social media. "We do a month of cinema and TV, and then put them on YouTube, and that sustains the campaign. We have had around 20 million views on YouTube, and we are still getting tens of thousands of views per month."

The company launched the Hamsters in 2009 with "A New Way to Roll." The next year was the "This or That" campaign where Kia used the hamsters to make fun of the competitive set of vehicles, depicted, literally, as appliances. The third Year of the Hamster used the now-unbearable LMFAO tune whose name I shall not mention, in an ad in which the hamsters are in a futuristic combat zone video game with killer robots.

And it's that time of year again: the quirky cricetidae are back in a new campaign that is also the first to have the hamsters interacting with people, as the rollicking rodents bring electronic dance music -- and of course, the Soul, which rises through the floor in a dazzle of laser light, to a stuffy 18th-century opera house. In the ad, a ballet performance circa 1799 turns out to be conducted by a hamster, who quickly turns things around as another hamster, a DJ, spins “In My Mind” remixed by Axwell. The rest of the animals appear, wearing the licensed Hamstar apparel. Things get wild, as the Soul appears and finally the hamsters climb in and the Soul takes them through time and space to next year's dimension.

The ad will run on 18,000 movie screens nationwide, on National CineMedia’s FirstLook pre-show program on Aug. 31, and television, with the ad debuting during the MTV Video Music Awards on Sept. 6. It will also be on all Kia social and digital platforms, including Facebook, YouTube and Kia.com.

Sprague says Kia will use the hamsters until the animals jump the shark (which could actually be a cool idea for next year's campaign!). "Everything we have read and heard so far is they are iconic to the brand, that they represent the brand well, and that there is huge connection between Soul and the hamsters," says Sprague. That connection is so strong, he says, that Kia isn't even using the hamsters to pitch other vehicles. "We have talked about sneaking them into [advertising for] other vehicles; we have looked it for Forte and Rio and others, but they are iconic for Soul."