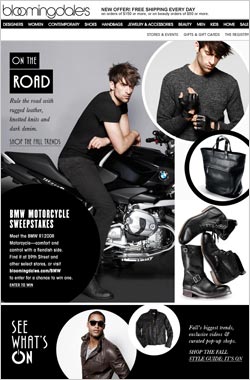 Motorcycle fashion varies, but tends to do so only within the constraints of its own walled garden. But regardless of brand -- whether Harley or BMW -- it is usually associated with leather, Gore Tex, pads and reflective patches. A premium retailer like Bloomingdale's, however, would probably not enter the mental picture.

Nonetheless, the high-end retailer is joining the bike zeitgeist with the help of BMW's motorcycle division, BMW Motorrad USA. But instead of BMW riders wearing Bloomingdale's gear, Bloomingdale's is wearing BMW motorcycles as part of its fall fashion campaign. Specifically, the BMW R 1200 R Classic is featured in the men's department at Bloomingdale's stores around the country, inside the fall men's catalog, and in the store windows of Bloomingdale's flagship store on 59th Street in Manhattan. The program includes a promotion dangling a BMW motorcycle, which can be entered both in-store and at www.bloomingdales.com.

The picture is affinity support for Bloomingdale's’ "On the Road" male-oriented shops and its motorcycle-themed line of travel apparel and accessories like fingerless gloves, hooded knits, leather totes, and tees.

Jim Callahan, head of brand marketing at BMW Motorrad USA, says Bloomingdale's will have signage in store -- noting that motorcycles are provided courtesy of the local dealer, with a message suggesting that consumers might visit the BMW motorcycle showroom. "We’ve come up with a neat way to broach the concept that motorcycling is an achievable and realistic past time," he says.

The deal came together early this year in a kind of summit between disparate brands, per Callahan. He points out that discussions with Bloomingdale's started early this year, when the retailer's product developers were considering the new menswear line, but needed a steel, nuts, bolts, grease and rumble brand to give it street credibility. After initial discussions, BMW in January brought Bloomingdale's management and agency people to the New York International Motorcycle Show (IMS) at the Jacob Javits Center.

Callahan tells Marketing Daily that the idea started small -- initially the plan was just the bike in a Bloomingdale's window -- and grew from there to encompass all of the retailer's stores along with cross-promotional elements and catalogue creative. Ironically, notes Callahan, it wasn't the R 1200 R that sparked the conversation, but a pair of vehicles in a category that BMW has never marketed in the U.S. until now: scooters. Bloomingdale's had caught wind of the news that BMW would have the C 600 Sport and C 650 GT in market by fall of this year.

"One of their people actually saw a press pick-up on our scooters, called us and asked to visit. They met us last January," says Callahan. "As we talked, they decided what they were going for was actually a more masculine, gritty, darker approach for the menswear line." He recalls that their tour of BMW's booth at IMS wasn't the usual product focus on engineering.

"It was really interesting to take people from the fashion industry with nothing to do with motorcycles around IMS. Instead of the technical aspect of the machines, we talked about the personality of people who would purchase that ride. We talked about the GS all-road, for example, as our 'cowboy' motorcycle, the 1000 RR [sport bike] as a risk-taker's machine. We then talked about the urban naked-bike category: understated, James Dean, parked outside a cafe, laid-back and cool -- and that's what they wanted. They instantly connected."

The catalogue with Bimmer bikes on its pages went to around 800,000 consumers this month, and the motorcycles will be in around 30 of their stores, notes BMW Motorrad USA Communications Manager Roy Oliemuller. "Of course, their flagship in Manhattan and our being in New Jersey made it easy to supply a larger number of bikes in all of their showrooms and display windows there," he says.

This is the first such retail program BMW Motorrad USA has done since it partnered with Saks Fifth Avenue several years ago. But that program was only in the Saks flagship display in Manhattan, not nationwide.

Meanwhile, the Motorcycle Industry Council reported earlier this year that motorcycles sales have been flat in 2012, partly because of a period this year of relatively lower gas prices, but mostly because of a slow economy that has put paid to discretionary purchase. That is no smaller matter for BMW, which --in addition to the scooters --has some big launches coming, including a new version of the GS dual-sport bike next year.