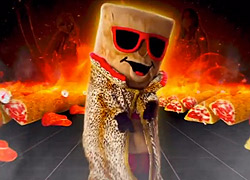 Watch out, Weird Al -- Snoop Dogg has turned one of his own songs into a parody tune endorsing (and promoting) his favorite “late night snack”: Hot Pockets.

In an online video, the rapper, actor and producer (who has been known to inhale cannabis that could lead to munchies) turns his hit single “Drop It Like It’s Hot” into a parody song, “Pocket Like It’s Hot.” The video, being hosted on the brand’s Facebook page, features appearances from WWE athlete Brodus Clay, Comedian Andy Milonakis, YouTube rapper DeStorm and the brand’s signature character “Herbie Hot Pocket.”

The video depicts the goings-on in a microwave oven as Snoop heats a Hot Pocket (contained in a locked steel briefcase). The video features Snoop and the rest of the characters dancing as if in a rap video (including women seductively nuzzling a Hot Pocket as they gyrate), while Snoop dishes out lyrics in his laid-back, signature style. (A sample lyric: “So don’t change the dizzle,/Turn it up a lizzle/got some cheesy drizzle/drippin’ on my chizzle.”) The video ends with Snoop taking the snack out of the microwave, and proclaiming, “Oh yeah, now it’s time to undress you.”

“Hot Pockets are irresistibly hot, and I thought this was a great digital campaign,” Dogg said in a statement about the video. “Hot Pockets have always been a favorite in my house, so this project was something I felt I could really get behind. Plus, we had a great time coming up with the remix.”

Representatives of the brand did not respond to questions by deadline, although a release noted the brand was hoping to rely on social media and fan sharing to help make the parody a viral hit.