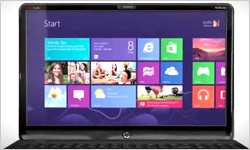 With Microsoft’s Windows 8 hitting retail outlets on Friday, the retailers at the forefront of computer purchases (electronics and office supply generally) are ramping up marketing programs designed to move customers along the path to purchase.

Office supply chain Staples, for instance, has launched an advertising campaign tying the product to its well-known “That was easy” tagline. The new “8 Was Easy” campaign is designed to humorously show the issues people have with technology and how Staples can make upgrading to the new operating platform painless. In one commercial, two women sit on a park bench when one declares a need to upgrade. After her friend unleashes a litany of the former’s boyfriend’s faults, the first woman emphasizes she meant upgrading her computer.

“People rely on their computers to store critical data and priceless memories, like photos,” said Alison Corcoran, senior vice president of marketing at Staples, in a statement. “Our new ad campaign showcases how much easier Staples can make upgrading to a new Windows 8-based PC with our ‘8 Was Easy’ launch program, which includes free training, data transfer and phone support.”

In a similar vein, OfficeMax Inc. is holding three-day “Demo Days” events over the launch weekend, featuring hourly live demonstrations of Windows 8, and PCs loaded with the operating systems for consumers to try out in-store.

“Our in-store Demo Days … provide customers with an opportunity to experience Windows 8 themselves and see how the user experience will come to life on the screen,” said Ronald Lalla, executive vice president and chief merchandising officer at OfficeMax, in a release.  “OfficeMax is helping businesses and consumers take the uncertainty out of purchasing the latest Windows 8 software, computers and tablets.”

Best Buy, meanwhile, has invested many hours and resources developing exclusive products and advanced employee training to ensure it can provide service (and sales) of Windows 8. According to news reports, Best Buy devoted thousands of training hours to ensure its staff knows every detail of Windows 8. In-store, customers will also have access to videos showing them how to operate certain parts of Windows 8.

As the personal and mobile computing worlds merge, Microsoft’s Windows 8 is launch is being positioned as a crucial product for the company’s future, and Microsoft is taking no chances. According to the Wall Street Journal, the company has been “playing an unprecedented role” with retailers about the marketing of the system. Computers in Best Buy stores, for instance, will show the photos and contacts of “Allison Brown,” a “fictional woman whose identity was crafted by Microsoft to make demonstration computers feel person,” according to the paper.