Panini Expands Its Relationship With The NBA 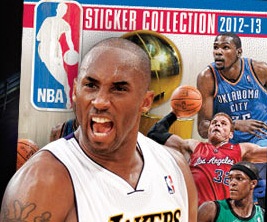 Italian-based licensed memorabilia company Panini has extended, through its Dallas-based Panini America division, its four-year-old a partnership with the NBA. The new deal puts Kobe Bryant in the spotlight around a collectible card platform that includes a special Kobe Bryant Anthology collection of cards.

Mark Warsop, CEO of Panini America, said Bryant will be spokesperson for Panini and that the anthology collection will be included in all of Panini cards throughout the year.

He says that there's still huge value in old-school cards, adding that digital media haven't killed them. "You can't take away that tangible feeling of opening a packet -- you can't get that in the digital format," he said. "Kobe is a key component of that. When you open the packet and see Bryant's card, that can't be replicated in any other format. You see kids playing on video games more and more often, but you see their imagination taking off in real collectible figures and cards." He added that Panini has 5,000 player contracts across eight major sports organizations including the NFL, NFL Players Association, the NHL, the MLB Players Association, and FIFA World Cup.

The deal supports the NBA's global strategy as the organization works to extend its presence in BRIC markets, since the merchandise company is in 40 countries. "What they have have demonstrated to us is that the card business is global. They have multiple points distribution worldwide," said Sal LaRocca, EVP of Global Merchandising Group, NBA. "One primary business goal of the NBA is to take merchandising business as far as we can. They demonstrated the capacity to do that."

The global business for sports merchandise and memorabilia is huge, notes Ken Ungar, president of Indianapolis-based U/S Sports Advisors and former first chief of staff at the Indianapolis Motor Speedway, concurs. "It's a billion-dollar industry in the U.S. and $4 to $5 billion worldwide,” he says, adding that his own son just bought a $40 box of football cards. "I see in other kids the same thing: it transcends generations. Yes, kids are voracious consumers of digital media, but you can't own fantasy football picks. Digital is access but not ownership."

Panini has expanded heavily in the Far East with traditional U.S. trading cards, but also market-specific products with a unique in-language SKU for China. Online elements include a Panini-curated blog that gets over 400,000 per month, per Walsop, and that cards have virtual links as well. "We have put individual codes on cards that when inputed into our online platform allows you a virtual version of physical collection, so we try to use social to enhance the experience.  There are also "Twittergraph" athletes can card and put their Twitter handle on it as well.

"It's been fun to be a part of bringing Panini to the U.S. market," said Kobe Bryant in a conference call yesterday. "I like being part of that: thinking out side the box and doing something new and different. It's great for the globalization of the NBA brand since Panini is global. I doubt we will ever catch soccer, but we want to make it a formidable challenge."