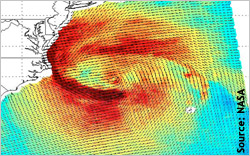 Several days after Hurricane Sandy tore up the Atlantic Coast, some search marketing agencies and their clients continue to feel the aftermath.

While some brands continue to increase online budgets, especially mobile, others put campaigns on hold. The storm could create mixed revenue results for search engines Google, Bing and Yahoo when they report Q4 2012 earnings.

Rob Griffin, EVP, global director of product development at Havas Digital, expects to see some fallout with brands that are more sensitive or that have businesses that rely on local commerce and activity.

It's not clear whether search query volume will rise during the quarter or whether the industry will see an impact on mobile devices. Sandy clearly impacted paid search with declines across many metrics for IgnitionOne U.S. clients, notes President Roger Barnette. "When the storm was at its worst on Tuesday, compared with the prior week, we saw impressions down 30%, clicks down 15% and spend down 10%," he said. "These numbers are for the entire U.S. market."

Bornstein Fertel raised her online search budget after running out of the company's daily allocation around 9:30 a.m. each morning during the past few days. She also continues to analyze Web site traffic through insights gained from WordStream. Site traffic rose in October to more than 6,500, most during the last week, from 4,500 in September.

"People click on every ad we have because they have no heat. But whether they heat with gas or oil, they don't understand their units are useless without electricity," she said, from her home in West Caldwell, N.J., where about 70% of residents have no power.

Bornstein Fertel increased her company's search budget, but Janel Laravie, founder of Chacka Marketing, said some clients hit pause on campaigns. One that is focused on lead generation had to close its call center and main office. The company not only stopped the search campaigns, but also Facebook.

"Search campaigns you can pause and resume at will without seeing serious impact, but on the Facebook side, I worry more about that," Laravie said. "It's a little more difficult to get into a rhythm on Facebook after stopping a campaign, especially when using it as a direct response and not a branding channel." After gaining momentum on the social network, halting can cause the brand to give up its position.

In terms of search queries, on Bing as with any major national event or severe weather disaster, there has been a significant uptick in all search terms associated with Hurricane Sandy during the past several days.

"Bing has seen a particular spike in searches for cleanup efforts, storm tracking, pictures and details about hurricane damage, as well as the storm's impact on gas prices and the impending presidential election," according to a Microsoft Bing spokesperson. "We expect these search trends to continue over the next several days as relief efforts expand and people attempt to sort out election and voting details with the disruption caused by Sandy."