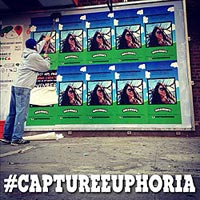 Ben & Jerry’s is thanking its Instagram followers around the world by turning some of their photos into ads that will appear in local media in the fans’ own neighborhoods.

The brand -- which currently has nearly 124,000 Instagram followers who “like” its photos nearly 5,000 times per day -- is encouraging them to submit photos that “best capture the euphoric feeling that comes with eating Ben & Jerry’s,” and tag them with #captureeuphoria.

Between November and January, Ben & Jerry’s will select about 20 of the photos, and its ad agency, Silver + Partners, will turn them into “thank-you” ads. Each ad will appear in media in the photographer-fan’s area (such as a local newspaper or magazine, a bus shelter or a billboard). Haworth Marketing + Media is handling media placement.

The program is running in a number of the 26 countries in which Ben & Jerry’s is sold.

In addition, all of the tagged photos will appear in a photo gallery on the “Capture Euphoria” promotion’s site.

To mark the program's kick-off, the brand selected one Instagram fan’s photo, created an ad, and went on location to film the winner’s reaction to seeing the ad in a local magazine. That video is being featured on the promotion site’s entry instructions page.

Ben & Jerry’s assistant digital marketing manager Michael Hayes, noting that the brand has already seen “unbelievable” response to its existing #FanFotoFriday program, says that the new program takes the engagement to the next level.

"Our company has one of the most active and dedicated fan bases out there, and this program is not only a show of our gratitude, but a very public celebration of those fans,” he says.