Supermarkets Swing Back To Center 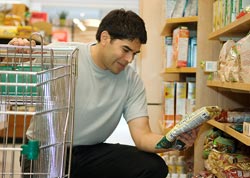 For years, the “center store” of the supermarket has been considered as passé as the cans of fruit cocktail sold there, with consumers spending more time -- and money -- wandering the produce, meat, deli and bakery aisles.

But new research from SymphonyIRI reports that the center aisles are now grabbing some two-thirds of grocery dollars, or about $440 billion, and 70% of unit sales. “When you put all the aisles together, the center store is actually outperforming the perimeter,” Susan Viamari, editor of Times & Trends, SymphonyIRI Group, tells Marketing Daily.

Driving the change is consumer realization that these aisles hold solutions that are cheaper, yet not much of a sacrifice.

“A lot of the things that started as belt tightening in the early part of the recession have become habits,” she says. “And consumers aren’t finding it painful. Just as K-cups have become an answer to the coffee shop, some of the high-end, shelf-stable meals and meal components are bringing the restaurant into the home. This bent toward a new, smart way to save is really transcending many of the aisles.”

The year’s biggest center-store gains in unit sales came in coffee, energy drinks and bottled water, and nearly one-half of the 50 largest center store categories posted above-average unit sales growth during the past year, it reports.

Still, grocery stores are struggling. Symphony IRI also reports that grocers hold 54% of general food sales, but share declined sharply during the past year, with convenience stores, mass merchandisers and club retailers all gaining as a result.

For grocers, she says the takeaway is that striving to connect with consumers in those center aisles is critical. “For some time, retailers have been saying, 'If I’m going to differentiate myself, it will be in offerings in the perimeter. Now, we’re realizing they have the ability to differentiate themselves anywhere in the store.”