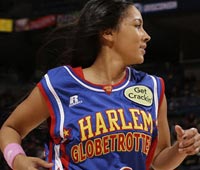 Following last week’s news that it will air a Super Bowl ad for the first time, Wonderful Pistachios has announced a three-year, seven-figure partnership with the Harlem Globetrotters, starting with the Globetrotters’ current exhibition-game season.

In addition to its presence at the Globetrotters’ North American games through signage, program advertising and sampling, the nut brand’s “Get Crackin’” logo will appear on the team’s jerseys.

The North American leg of the Globetrotters’ 2013 World Tour will stop in more than 240 cities.

Also, a Wonderful Pistachios spot featuring the Globetrotters will launch on national television and the brand’s Get Crackin’ site starting Jan. 21.

Marc Seguin, VP marketing for Wonderful Pistachios parent Paramount Farms, said the partnership is a natural fit because the Globetrotters and their fans “enjoy healthy snacking.”

“We are selling a record number of pistachios at sports events because consumers want better food choices when they’re watching a game,” he said.