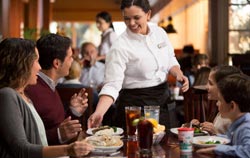 Red Lobster’s new, Spanish-language campaign, which aims to introduce more Hispanic families to the chain and promote its new menu, includes both standard TV spots and a sponsored-content partnership with Univision.

The first ad, from WPP's Wing, is an adaptation, based on Hispanic consumer insights, of the chain’s general-market "Real People" advertising campaign that features a "Sea Food Differently" tagline.

Taglined "Disfruta un Mar de Sabores" ("Enjoy a Sea of Flavors"), the ad features  Ariana Paz, a real server at the Gainesville, Fla. Red Lobster, expressing her “unscripted passion” for the restaurant’s food and atmosphere, while serving a meal to a Hispanic family.

"We know that many Hispanics see the dining experience as an opportunity to bring family and friends together to celebrate, share and bond, so that important moment is brought to life in the ad," said Red Lobster director of marketing Stewart Marquina.

The chain, a division of Darden Restaurants, is also getting out the message that it has demonstrated “ongoing commitment” to the Hispanic community in the form of donations and support for organizations such as ASPIRA, the Congressional Hispanic Caucus Institute, the Hispanic Scholarship Fund, the League of United Latin American Citizens and the National Council of La Raza.