Dodge Lets You Buy Your Dart, With Help 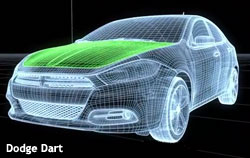 It's always kind of weird when you know you are going to get a gift and kind of decide to hint at the gift you really want. And then if you actually get it, you have to be all like, "Wow, what a surprise!"

Well, Dodge Brand is sort of letting you do that, but making it fun and arranging it so you don't have to do an acting job. In essence, the Chrysler LLC division has created what it calls an online gift registry, essentially a social-media program by which people can enlist friends and relatives to raise money for their potential Dodge Dart.

The Dodge Dart Registry starts with consumers configuring and customizing a Dart, then setting a pecuniary goal for the amount of money they want to raise to fund it. Then, kind of like seats in a theatre with placards affixed with the name of someone who "bought" that chair, friends, family or anyone can  sponsor itemized parts -- a steering wheel, shifter, seat, or engine -- per the Auburn Hills, Mich. automaker.

Once registered, a giftee has the option of connecting to Facebook and Twitter to get the word out about their Dart jones and thank people who donated. RocketHub handles the entire crowdfunding process. Funds raised on the registry, minus processing fees, can be used to purchase the car.

Dodge says it will get a bit of marketing push out of it, since those who want a Dart will explain why they want one. That is a good bet, since most people -- kids, certainly -- who desperately want something, maybe for Christmas, have to subtly tout its product attributes. For kids, that might be during a parental dinner conversation about tomorrow's weather.

The Dodge Dart registry launches Jan. 20 with a new 30-second commercial, “How to Change Buying Cars Forever," which debuts during the Fox network broadcast of the NFL National Football Conference Championship Game.

At last week's North American International Auto Show in Detroit, Chrysler LLC CMO Olivier Francois told Marketing Daily that the Dart campaign, which launched in July via Portland, Ore.-based Wieden+Kennedy, was the only really big campaign for the brand last year. But he adds that the effort, "New Rules," which launched with a 90-second ad, "How to Change Cars Forever," has been as much about brand positioning as product.

"I really think we almost invented a language for the brand with those eight or nine ads. The voice, the music, the beat, the way the images are cut: It's sarcastic, it's rebellious, incredibly modern, connects very well with a younger target, and has even given birth to parodies ["How to Win Awards" at the Golden Globes].” The campaign followed with other spots in the same tone featuring the Jay-Z and Kanye West track, “No Church in the Wild.”