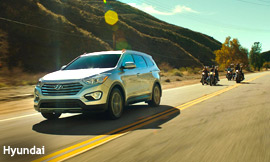 Love means never having to say "Soccer practice." Hyundai has a seven-seat crossover in the 2013 Santa Fe, but is using its big Super Bowl grab (and its requirement that all ads in and around it be borderline certifiable) to tout Santa Fe as a vehicle for adventure that is exciting for kids and parents alike. Watch a clip of Gene Hackman in "The Royal Tenenbaums" taking his overprotected grand-kids on wild outings that would make their father -- any father -- apoplectic, then tone it down a bit and you get the idea. Actually, don't tone it down that much.

It's actually not a new creative idea for the automaker and its agency Huntington Beach, Calif.-based Innocean USA. An earlier ad for the nameplate, called "Don't Tell," has a dad taking kids on expeditions that mom would not have approved of until the very end of the spot, where we see that mom is taking one of the kids parachuting. That spot, plus a new one touting the Genesis Spec-R performance car, will run pre-game.

The lynchpin ad is a 60-second piece that will run just before kickoff. The ad, which shows a family on an alt-rock-infused day of joie de vivre and madness, features music by a famous band whose name shall not be spoken (until Friday). The band's members also appear in the ad. Notes VP Marketing Steve Shannon, the post-coin toss ad buy is the best you can get because everyone's finished with physical needs, fridge raiding, bowl dipping, and top-popping of ceremonial beverages. And then in the first and second quarters, respectively, are another ad Santa Fe spot and one for the Sonata Turbo. The Santa Fe spot has a mom ferrying her kid around town to assemble a team of precociously machismo friends to give some payback to a schoolyard bully.

Shannon says the game milieu allows Hyundai to dispense with the more typical left-brain cannonade of consideration points. "Hyundai has lots of rational reasons for purchase," says Shannon, "but what the Super Bowl almost requires is that you stretch yourself and focus on fun, passion, excitement and energy. So it's tailor-made to let us to show our other side."

For the the play-date-themed long ad, the company wanted to swerve to avoid the "Stereotypical mom and dad scene: taking the three kids to Disneyland or the beach," says Shannon. "This is more about parents who, rather than give up their lives, bring kids into their life."

Hyundai will also have seven ads in the Academy Awards, and Shannon says it's an entirely different animal: less reach, but more of a chance to offer a more premium message. "They definitely work in different ways. In the Super Bowl the numbers are big, but you are competing with other awards. We have auto exclusivity for the Academy Awards and it's more about style and sophistication."

Finally, the effort includes a big digital component, including a 1:40 video on Facebook, and a lot of other pre-game elements the automaker is being cagey about right now.

Greg Braun, executive creative director at Innocean USA, says that -- kind of like nailing down a hotel room in Detroit for the next auto show -- planning for the Super Bowl creative starts a year in advance. "The Super Bowl is crucially important to us at Innocean and to the client so we are thinking about it all year; as soon as we wrap we are thinking about next year."