Social Shopper: Is It The Year Of The 'Print Cliff'? 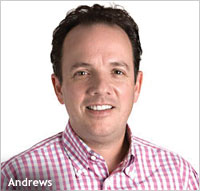 Chalk it up to one of those industry incongruities: While newspapers have lost something like 30% of readers in the last 20 years, the free-standing inserts that fatten them up are still gaining weight. (Kantar reports that last year, FSI coupon activity gained 0.8%, with CPG coupons up 2.4%.)

John Andrews, CEO and founder of Collective Bias, a Bentonville, Ark.-based social shopper marketing company, tells Marketing Daily what’s afoot in shopper marketing, and why he thinks it all is about to change.

Q: So shopper marketing is odd. Much of it pours into print, and, while for years people have predicted a bigger shift to digital, it hasn’t really happened. Yet, you think this is the year. Want to explain?

A: Sure, I call it the “print cliff,” and this is the year. There is something like $10 billion spent on FSIs each year, and another $4 billion or so in-store circulars -- $15 billion can’t be wrong. Brands need to get information about new products and promotions and coupons out there. And they know purchasing FSIs are inefficient. As soon as those dollars can find a good situation, and if they can accomplish the same goals, they are going to flow in that direction. And yes, I think this is the year that this economic reality will hit advertisers. Up until now, they haven’t seen a scalable option. And of course, they want to know how to measure ROI. Advertisers want to be where consumers are, and that’s not newspapers. The eyeballs just aren’t there.

Q: And your company is an alternative?

A: Yes, companies like this one. It’s its own kind of shopper marketing. We are targeting the same trade dollars going into FSIs. The rise of social platforms created a huge need for media that wasn’t there. When I worked in emerging media for Walmart, we started looking at blogs that talked about Walmart’s core brand promise of saving money, and put that together as the ElevenMoms program, which has now been rebranded as WalmartMoms. And at Collective Bias, we sell media designed to travel across social channels, whether it’s YouTube, Pinterest, Instagram, whatever -- anything that’s along the consumer’s path to purchase. We have a community of something like 1,400 influencers, with an average of 40,000 followers. Our average campaign will generate between 8 and 12 million in measured reach, and of course, we’re tracking overall share of voice.

Q: So what makes social content a better way to connect?

A: Take Duane Reade, a client of ours, as an example. One of our members may choose to participate in a campaign for a new fresh food it’s selling. And that influencer will get paid, usually between $200 and $500, for creating something his or her audience wants. So they create content that has some value to the user, maybe it’s a recipe or a how-to video or a photo montage. If I’m an advertiser, I don't really want an interruption-style advertising message, which is just some old ad model put on new technology. The quality of the content has to be compelling in order to get consumed.

Q: You don’t think that makes consumers leery? After all, aren’t many trying to research brands without bias?

A:  Our influencers have curated an audience, and if they break the trust of that audience, and provide something that is not valuable, they won’t keep the reader. We are careful to make sure it is disclosed, so in effect it becomes known as a piece of advertorial content, and something I may choose to engage with. It’s something I might find valuable.

digital, newspapers, print, q&a, retail, social media
1 comment about "Social Shopper: Is It The Year Of The 'Print Cliff'?".
Check to receive email when comments are posted.
Next story loading