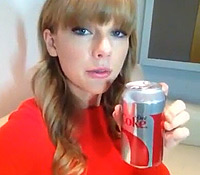 Swift announced the news first to her Facebook fans (38.7 million “likes), via a YouTube video posted Sunday. That followed an Advertising Age story on Friday leaking the news that Swift would become a “brand ambassador of sorts.”

Now, the brand and Swift have revealed some of the specifics, described as an “evolution” of Diet Coke’s “Stay Extraordinary” campaign.

Swift will be featured in television, print and digital advertising schedule to launch this spring.

The activations will include “extraordinary” access to Swift online and in person throughout her Red Tour, which kicks off March 13 in Omaha, Neb., according to the brand.

Swift’s “I Knew You Were in Trouble” is currently in its second week at #1 on Billboard’s Mainstream Top 40 chart, the second song from her 5 million-selling current album “RED” to top worldwide charts.

In the video, Swift calls Diet Coke “one of the loves of my life” and encourages fans to “like” Diet Coke’s Facebook page to experience “so many fun things” -- including behind-the-scenes looks at a commercial shoot.

Swift and Diet Coke will, of course, now be engaged in a marketing duel with Pepsi and its spokespersons Beyonce and Sofia Vergara.

Since becoming Pepsi’s spokesperson last month, Beyonce has been more in the public eye than ever, with her (reportedly lip-synched) performance at President Obama’s second Inauguration Ceremony. She is also scheduled to headline the Pepsi-sponsored Super Bowl halftime show.

The Pepsi/Beyonce partnership has also come in for criticism from groups working to reduce Americans’ consumption of sugary beverages -- an issue that is presumably less problematic in the diet beverage realm.

Meanwhile, in European markets, Diet Coke has just unveiled a “hunk” commercial starring British model Andrew Cooper -- a new entry in the now-legendary campaign that debuted in 1994 with Lucky Vanous featured as a sweaty construction worker.

The new spot -- showing Cooper as a gardener who doffs his shirt after a can of Diet Coke splashes all over him (inspiring awe among a group of young women picnicking nearby) -- is expected to be rolled out worldwide if it’s a hit, reports BusinessInsider.