For Epson, Valentine's Day Is About Pictures 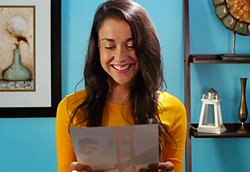 Forget flowers and chocolate; the way to a woman’s heart (or multiple women’s hearts) is through a surprise photograph of you on their printer, at least according to Epson.

The company is touting its “Epson Connect” cloud-based printing technology through a social-media promotion (with the lengthy title of “Be Here, Print There” Remote Romeo Contest) that shows a young man impressing women with his ability to print photos from everywhere.

A Web video depicts a young man taking pictures of himself with a smartphone at various scenic destinations (the beach, the Golden Gate Bridge, the “Welcome to Las Vegas” sign), holding signs indicating his love for different women. Using the Epson Connect app on his phone, he sends these photos to each of these women, all of whom are flattered to receive such a thoughtful, one-of-a-kind gift. The video ends with the young man sending a photo reading, “I [heart] Jane” to a woman named “Angela” and a prompt for viewers to tweet (using the hashtag #Epson Connect) what she should do next. Ten people who have the most original, creative and relevant (and family-friendly) responses will win new Epson printers with the Epson Connect technology.

“The whole point of Epson Connect is that as you’re accessing your documents online; you can quickly print them,” Patrick Chen, product manager for Epson Connect, tells Marketing Daily. “And, while most of that is work-related, we wanted to show we could use it for fun too.”

Using Twitter and other social media is also a way to connect with younger consumers, who aren’t as likely to be using traditional channels (or using them at the same times), Chen says. Ultimately, the promotion is designed to inject a little fun into the brand while expanding on its audience. “It’s to engage them from a humorous standpoint,” Chen says. “But it’s also to show that we’re not just appealing to the businessmen, but also to the people in college and high school.”