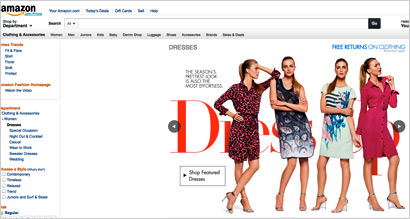 Would the kind of woman who would rock a $24,000 bridesmaid gown shop in the same store that sells $5 mini-dresses?

Well, if the store is Amazon, she just might. Or at least that’s what the e-commerce giant is hoping --reportedly rolling out its first-ever TV campaign for Amazon Fashion, an effort to let fashionistas know that the world’s biggest online retailer has plenty of runway swagger.

Women’s Wear Daily reports that the company is launching a 30-second TV spot, directed by director/photographer Peggy Sirota, said to be airing in prime-time programming in select markets. The campaign, which is featured on the site’s home page, is also backed with print, outdoor, digital and social ads showcasing the same spring dresses, WWD reports.

The designers are as varied as the prices, with pieces by Burberry, Halston, Chanel, Lanvin, and Escada at the high end, and Hurley, Calvin Klein and Jones New York in the affordable range.

The move is the latest development to come out of Amazon’s massive Williamsburg, N.Y. studio, which Amazon acquired for photographing fashion back in November. Amazon Fashion is headed by Cathy Beaudoin, founder of Piperlime, the shoe site now owned by Gap, and includes Shopbop, a women's apparel site and MyHabit.com, a flash sale site that competes with the likes of Gilt and Rue LaLa, as well as Zappos.

But while Amazon has done plenty to boost the brand-name cache, it still faces on uphill battle among brands that just don’t want to be sold next to Pampers, salad dressing and tube socks. Last fall, for example, Louis Vuitton told the Financial Times it would “never” be sold on Amazon. And many other high-end brands balk because they are already being sold on the site, via third-party sellers.

Flexing its fashion muscle comes at an interesting time for Amazon, which disappointed analysts with profits and sales below expectations in its latest quarterly report.