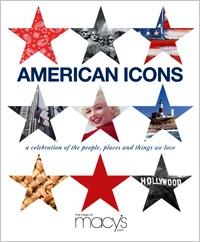 In an effort to build on its positioning as America’s department store, Macy’s says it will introduce an “American Icons” summer campaign, a tribute that ranges from baseball and grilling to drive-in movies and lazy road trips.

There’s cooking, including a barbecue talent search, with the Cincinnati-based retailer looking to celebrate Grilling Gurus: The winner, determined at a sizzle-off in Atlanta, gets $10,000. And -- despite its ongoing court feud between Martha Stewart and rival retailer JCPenney -- the campaign even includes a Martha moment, with the winner of a regional recipe sweepstakes earning a close encounter with Martha herself.

For Father’s Day, it will sponsor a day at the ballpark, with ticket and merchandise giveaways at 10 Major League and 35 Minor League Baseball games.

And finally, it’s sponsoring a “Great American Road Trip” with pop duo Megan and Liz, who will tour the country in a Ford Mustang convertible, and along the way, write the ultimate road-trip song. (The pair will arrive back at New York Macy’s to perform at its annual Macy’s 4th of July Fireworks.)

Macy’s is also using the occasion to sink its teeth into “Got Your 6,” a cause-related initiative aimed at helping veterans reintegrate. (The name means “Got your back;” in military terms, the 6:00 position refers to the back of a unit.) GY6 links some 30 veteran-focused, nonprofit partners, focusing on jobs, education, health, housing, family and leadership.

Macy’s goal is to raise $3 million for the group, using a special Macy’s Savings Pass (similar to those it uses to raise money to fight heart disease and breast cancer). Consumers pay $3 for the pass, earning discounts of up to 20%.