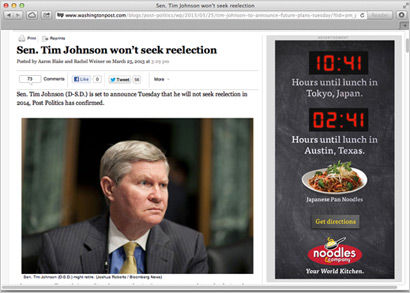 Noodles & Company, the restaurant chain that offers a wide variety of international noodle and pasta dishes, is looking to drive broader awareness of that range of cuisines through a new, multichannel campaign that introduces its first brand ID/tagline: “Your World Kitchen.”

The Broomfield, Colo.-based chain, which has more than 300 restaurants in 26 states from California to Connecticut, offers “authentic, internationally flavored” noodles and pasta dishes, such as Japanese Pan Noodles, Penne Rosa and Wisconsin Mac & Cheese.

The campaign marks Noodles & Company’s first brand-wide advertising, and is also the first work for the chain by its new agency, TDA_Boulder.

It spans traditional and digital media, including out-of-home, radio, unusual outer-wrappers on newspaper subscriber copies (as well as FSIs), and site-specific Flash banners on international news and music sites.

The traditional components of the campaign are being introduced first in Denver, Kansas City and Austin, and will be rolled out nationally over time. The digital components are national.

The largest element is out-of-home, which includes nine unique executions across multiple installations in the three initial markets targeted by traditional media.

Some are market-specific, like a Denver wallscape with five big arrows pointing down to a trendy “LoDo” parking lot, headlined “Recipes Imported from More Countries Than These Cars.” Others have unusual formats, like a stacked double billboard that reads, on top, “Dishes from the Northern Hemisphere,”and on bottom, “And Southern Hemisphere.”

Other billboards are traditional in format, but designed to make viewers think a bit. Example: An Austin billboard with three (non-functional) clocks, labeled “Japan,” “Italy” and “Austin” -- all showing the same time. Intended message: Thanks to Noodles & Company, Japanese noodles and Italian pasta are right in Austin’s time zone.

Three 30-second radio executions are being aired on broadcast and digital stations in the initial traditional-media target markets.

Six unique, site-specific Flash banners include formats such as working digital clocks on international news sites that display the “hours until lunch” in an international location like Jakarta, and in the viewer’s home city.

Flash banners on music sites like Pandora are targeting anyone requesting “world music.”