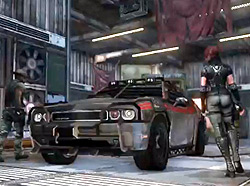 Dodge Charger is driving down the middle of a road with digital on one side and traditional on the other. It’s a partnership that's really unique -- which in this case is probably not a cliché (which by itself is kind of rare).

The real unique part involves a media symbiosis between Syfy TV show “Defiance,” which first aired on Monday, and the online shooter game on which it is based, created by Trion and set up for for PC, PlayStation 3, and Xbox 360 (about $60).

Assuming the game/TV relationship works, Dodge hopes to get traction among science fiction and fantasy lovers and social gamers. With any luck, the media architecture between SyFy and Trion -- five years in the making -- will create a sort of trans-media firestorm in which the game-playing population becomes -- or at least helps build -- the TV audience, with Dodge Brand in the hot zone.

Dodge says the partnership goes beyond placement on the show and game, with co-branded advertisements and promotions across television, digital, social media, mobile, gaming and on-demand.

The storyline is built on a near-future dystopia (there probably wouldn’t be shooters if it weren’t) in which the hero, Joshua Nolan, is the lawkeeper -- a futuristic Matt Dillon -- in what used to be St. Louis, now Defiance. The plot revolves around Nolan and his struggle to keep aliens away from the city. Where does Dodge fit in? Nolan drives an up-armored Charger on the TV show and a Challenger with the same treatment in the game, which launched a couple of weeks ago.

The automaker says the cars don’t appear until the sixth episode, which happens in May. When they do show up, the cars will have a customization job so they roll in with a retro-future look.

When the May episode airs, the Chrysler LLC division will launch a co-branded television spot and a social gaming experience and contest, per the automaker. While the television series and game are stand-alone and concurrent, the symbiosis means the show affects the game, and the game influences the show. We’ll see.