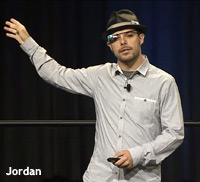 Google wants technology to "step out of the way" as developers integrate it into everyday life. That's per Timothy Jordan, developer advocate on Project Glass, speaking to i/o Conference attendees Thursday. It means major changes in online advertising for agencies and those developing apps and utilities, but what do brands need to know?

Executives at traditional brands are aware of the shifts in advertising, said Bob Goodman, senior vice president and director of user experience at Arnold Worldwide. "They can't afford to ignore it," he said. "They're all looking for help in understanding what it means for them and how to improve on connecting with consumers."

In Google's world, search and paid search continue to support apps and utilities as the underlying technology, the reference design. Consumers won't type a query, but rather indicate or imply the need for information through clicks on photos or interactions with contextual content.

A click turns into a conversation and every page becomes a form of search, Goodman said. "You may not perceive yourself as performing a search, but rather navigating through content during your everyday life," he said. "Marketers need to think more about the assets they can leverage to make use of content."

Brands need to broaden their notion of the meanings of "advertising" and "media." Technologies like Google Glass and Google Now, as well as apps like Google Maps, transition the ad industry into the era of content-driven advertising. Content in multiple forms that can move across screens with contextual relevance will become crucial to the way brands reach consumers. Google isn't the only engine moving in this direction. Bing and Yahoo have begun to make changes too, but they have yet to become as vocal.

That transition began when Google served the first answers to queries in the search results, rather than required searchers to click on the link that took them to a page, according to Raymond James Analyst Aaron Kessler. Ultimately, Google gets paid for sending traffic to other sites, so they will likely want to continue using that model, he said. It allows Google to move farther down the funnel to offer information similar to travel comparison sites. You can make a similar argument for other publishers, he said, pointing to Facebook's recent Atlas acquisition to improve attribution tracking.

Krishna Subramanian, CMO at Velti, said the next generation of online advertising points to multiscreen advertising, which will lower acquisition costs for gaining new customers. "Google Glass will provide the location-based data that gets tied back into ad targeting," he said. "People initially talked about serving coupons to a consumer standing in front of a Starbucks, but the real value will become tying together all the data to identify the daily path they travel and the frequency in which they do it."