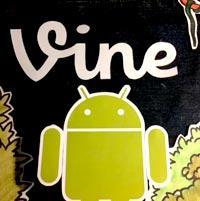 The company used #GalaxyVine to promote the availability of Vine on its Galaxy line of Android smartphones.

Vine's local-mobile focus and six-minute looping format aim to make it easy for merchants and manufacturers to catch the attention of consumers on Twitter through shareable clips. Twitter Engineer Sara Haider wrote in a blog post that Vine had attracted 13 million people in four months to sign up for the service.

The Android app offers similar features to the one for the iPhone. Users can shoot video, share it and explore others. Twitter added a zoom feature that is available during shooting. While there is no word yet on use of Vine to serve up in search engine queries or optimization tips, users can expect to see other features in the coming weeks like front-facing camera, search, mentions and hashtags -- as well as the ability to share clips on Facebook.