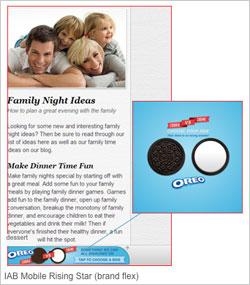 Among the key findings, the five Mobile Rising Stars ad formats overall generated nearly twice the interaction rate of banners, with  higher recall for campaign brand name and message among survey participants. People also were quicker to respond to Rising Stars ads, thinking they were “better” overall than standard ads.

The IAB released the study results in connection with Mobile Rising Stars in its official Standard Ad Portfolio, which provides ad format specifications and includes the Rising Stars Display ads. The announcement was made at a trade conference.

While early adopters haven't waited for units to become IAB standards, “we know from experience with the display Rising Stars that becoming so accelerates adoption,” said Peter Minnium, head of brand initiatives for the IAB.

With its new research, the IAB aims to provide further incentive for marketers to invest in the formats. For the study, conducted with comScocre and Vibrant Media, it looked at results from mobile ads running in Oreo’s “Cookies vs. Crème” marketing campaign based on responses from 1,600 adults aged 18-54 on iOS devices in March and April.

Users were shown a mock-up Web page with either one of the Mobile Rising Stars ads, a standard mobile banner, or no ad at all. Among the five Rising Stars units -- Filmstrip, Slider, Adhesion Banner, Full Page Flex or Push -- the test also included a variation of the Full Page ad featuring a Vibrant in-text ad component.

In terms of interaction, the IAB found that 9.3% of participants slid, swiped or tapped a Rising Stars ad compared to only 5.2% for traditional mobile banners. The time until the first interaction after seeing the rich media units was also faster, at 25 seconds to 33.6 seconds. The higher rate of engagement for the Rising Stars units also led to higher brand recall, 98.1% to 83%. Recall was slightly higher for all mobile ads on tablets (87.1%) than smartphones (80.3%)

In addition, people who interacted with the those ads were also 23% more likely to recall the “Cookie vs. Crème“ campaign theme. Four of out five (81%) did so for Rising Stars ads compared to two-thirds of those who viewed banners.

Users also indicated a preference for the rich media ads. More than half thought the Rising Stars formats were more fun than standard ads and 60% of those who engaged with the former, thought they were more attention grabbing.

Since the Mobile Stars ads were announced in February 2012, Minnium said the Full Page Flex unit, which accommodates both portrait and landscape orientation, had seen especially wide adoption by advertisers and publishers.

Unlike the their display counterparts, he noted the Mobile Rising Stars enter an ad landscape “where the cement is still being poured.” eMarketer projects mobile advertising will rise nearly 80% this year to $7.9 billion in the U.S. Rich media, however, made up only 3% of the $36.6 million in U.S. Internet ad spending last year, according to the IAB.