How Do You Feel About This: AOL Enables Brands To Track Users' Unconscious Emotions, In Real-Time 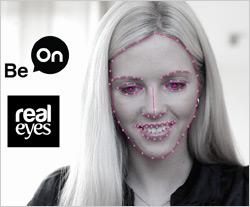 In a move that ups the ante for real-time media measurement, AOL today will unveil a new platform that enables brands to measure not just whether people are exposed to or even see their content, but how they actually feel about it. The platform, which is being introduced by fledgling AOL branded entertainment unit Be On, utilizes users’ own webcams to read their facial expressions while watching a brand’s video content in order to understand what their unconscious feelings are while exposed to the brand’s messages.

The platform is being powered by Realeyes, a tech firm that has figured out an economical way of utilizing “computer vision to read faces and measure human emotion” via common webcams on users' PCs, tablets and smartphones, and initially will only track the faces and emotions of users participating into opt-in consumer panels operated by CINT and Toluna, but Be On CEO René Rechtman says AOL is already considering ways it could deploy the technology to track the emotional sentiment of its general users who want to opt into it.

The initial goal, he says, is to improve engagement levels that users have with brands running video content on AOL, but over time he says it could be used to improve the overall user experience with any AOL or brand content.

“It has always been very clear that content that has a strong emotional component has a much greater engagement and consumer response. We always knew that, but we didn’t have the science to execute it,” Rechtman explains, adding: “Now we have the technology and the science to measure how content affects people emotionally.”

AOL’s program is the latest in a rapid progression of so-called neuromarketing research applications that have emerged over the past half dozen years as new forms of biometric measurement technologies have enabled neuroscientists to develop methods for measuring the unconscious responses that consumers have to media, advertising and other forms of marketing -- even what people are feeling when they’re in stores looking at products and offers on shelves. Such neuromarketing initiatives have been a major focus on Madison Avenue, including the Advertising Research Foundation, which gave ample discussion to it during last week’s Audience Measurement conference in New York.

But coincidental developments in technology -- especially the ubiquitous distribution of webcams in personal media devices -- have created the opportunity to scale such tracking and to do it in real-time. Recently, Sticky, a company that Procter & Gamble encouraged to develop a method for using webcams to track users' eye movements to verify whether consumers are actually looking at ads or other brand content, introduced a panel capable of measuring it among hundreds of thousands of users in real-time.

As significant as eye-tracking is, AOL’s Rechtman says emotional tracking is the next logical progression, because the goal of media content -- especially the kind of “native” brand content AOL’s fledgling Be On unit is developing -- is to influence the eyes that are on it.