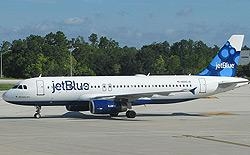 Just as the summer travel season heats up, the American Customer Satisfaction Index (ACSI) has released its annual travel report that rates customer satisfaction with hotels and airlines.

ACSI’s travel report includes scores on the ACSI’s 100-point scale for the nation’s largest hotels and airlines and an analysis of their customer experience performance. In addition, this year’s report for the first time includes data on how satisfied travelers are with key industry experiences, like ease of check-in, quality of loyalty program and courtesy and helpfulness of staff.

Satisfaction with airlines gains 3.0% to 69 on the ACSI’s 100-point scale, improving for a second straight year. Despite the gain, airlines is near the bottom of all industries measured in ACSI, and only subscription TV and Internet service providers have lower levels of customer satisfaction.

JetBlue leads for a second year (+2% to 83), with Southwest following closely (+5% to 81). Southwest’s gain comes a year after the merger with AirTran, and a short-term erosion in passenger satisfaction. United Airlines remains at the bottom with a score of 62.

Customers give high marks to airlines for check-in process (82), ease of making reservations (82), baggage handling (80), and the courtesy and helpfulness of flight crews (81).The quality of in-flight services such as the food, beverage service, movies, and music is not very good (68), and seat comfort is awful (63).

“Crowded seating, rising ticket prices, extra fees and poor service all contribute to a rather dreary travel experience,” says Claes Fornell, ACSI founder and chairman, in a statement. “Airlines continue to improve service for business travelers, which is important since they are the most profitable customer group. Still, their satisfaction remains at a level slightly below that of other passengers.”

In hotels, guest satisfaction remains stuck at an ACSI benchmark of 77 for the third straight year.

Marriott has made the biggest gain (+5% to 82) to pass Hilton (unchanged at 80) for the top spot. Wyndham Worldwide, which operates budget brands such as Ramada, Days Inn and Super 8, remains in the industry basement and well below all other chains (+3% to 72).

“Hotels continue to rely on perks like free Wi-Fi, breakfast buffets and loyalty discounts to encourage repeat business, but higher levels of customer satisfaction over the past few years also boost loyalty,” says David VanAmburg, ACSI director, in a statement. “Similar to the airline industry, hotels are seeing a rise in customer satisfaction for a crucial business segment, as business traveler satisfaction now matches that of leisure guests.”

Nearly 9,000 customer surveys were collected in the first quarter of 2013 to produce the report.