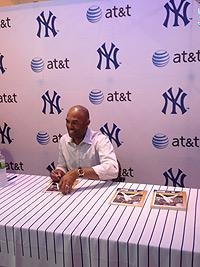 With Yankees closer Mariano Rivera making his final tour of Major League Baseball this season, AT&T has devised a way for fans to give one of the league’s pitching greats a suitable goodbye.

The company, which has been a longtime sponsor of Rivera’s Yankees, has launched a digital campaign, “My Favorite Mo-ment,” through which fans can share their thanks to “Mo.” Through a dedicated microsite, fans can upload video, photo and text messages, some of which will eventually appear on Yankee Stadium’s Jumbotron screen.

“When we heard he was announcing his retirement, we quickly huddled and wondered what we could do for one of the all-time Yankee greats,” Olga Serna, associate director of corporate sponsorship at AT&T, tells Marketing Daily.

Fans logging into the site get a special message from Yankees manager Joe Girardi about guidelines for uploading their messages. In the video, Girardi uses hand signals (like the ones used in the game for plays) to encourage people to keep their thanks profanity- (as well as logo-, other team- or player mentions- and music-) free, (to the chagrin of many Red Sox fans, no doubt). (The signals are translated via subtitles for the viewer.)

“Obviously, we want to be respectful,” Serna says. “This is something Mariano will participate in and watch.”

Through the promotion, which will last until the latter part of the baseball season, AT&T will also house a booth at Yankee home games where fans can record messages, as well. All content will be integrated into the website, and some of the fan-created content will be edited together to be shown on the Jumbotron. The videos may also become part of AT&T’s advertising on the YES Network.

Though promotion around the Mo-ments will be largely New York based, a player of Rivera’s stature and a team such as the Yankees are likely to get some national response as well. Serna says the company is prepared for that.

“It’s pretty much a New York campaign, but we’ve certainly seen traction from stories around the country,” she says. “The one thing that resonates [about Rivera] is he’s very humble. We wanted to do something that speaks to who he is.”