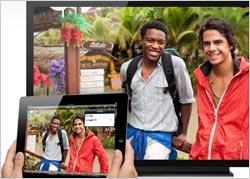 In this still fledgling streaming media set-top-box market, Apple TV has a commanding 56.1% of sales, according to a new report from Frost & Sullivan. Despite a limited range of available content, Apple’s device has more than twice the sales of the Roku box, which has 21.5% of the market. TiVo trails with 6.5%. All others, including those running Google TV account for the remaining 15.9% of the market.

But according to co-author Dan Rayburn, Apple's dominance has as much to do with the set-top box's integration with the full range of mobile devices as it does with streaming. “This is not (yet) a market being driven by the value proposition of the streaming TV experience,” he writes. “Apple TVs Airplay feature was strategically crafted to simplify the process of transferring laptop and tablet displays to a TV screen, and it is Airplay --  not OTT streaming -- that is the primary reason for purchase of Apple TV devices.”

Airplay was introduced by Apple several years ago as a way to connect iOS devices to the Apple TV set-top box. When properly synchronized, an iPhone or iPad can throw images and video from the small screen onto a large screen.

The Roku box, in fact, is being driven more by its wide range of content choices, although its penetration remains relatively low. The report estimates that only Apple and Roku are achieving sales levels of 1 million units or more per year.

Rayburn notes that despite numerous deals with TV hardware providers and other device manufacturers, Google TV has quite noticeably failed to have an impact on the market. The report estimates an installed base for Google of less than 1 million units, most of which can be attributed to a discontinued box from Logitech.

And it should be noted that the streaming media boxes are still contending against a much more established game console platform. Gaming devices such as the Microsoft Xbox and PlayStation should sell more than 35 million units this year alone, Frost & Sullivan estimates.

All of the contenders in the space have been trying to expand their content offerings in recent months by cutting deals with cable and other content providers. Apple TV expanded its offerings by adding HBO Go and Sky TV, which includes a life newsfeed. Rumors have surfaced in recent days that Apple is planning a TV service that would allow users to skip ads on cable and network TV but compensate those broadcasters for lost ad revenue.