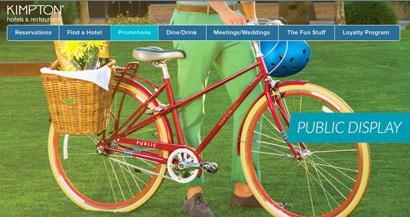 With bike commuting and recreation at an all-time high, Kimpton Hotels is capitalizing on the trend with a partnership with bicycle and gear company Public.

The company was asked to design a colorful, customized fleet of Kimpton-branded bicycles. The bikes are complimentary for guests’ enjoyment at all properties nationwide, in keeping with Kimpton’s commitment to health, well-being and sense of fun and adventure.

The Kimpton bike will be easy to spot on the street with its custom cherry-red frame with orange and blue accents, cream tires, matching double walled rims, brass bell, and rear basket that can be filled with tasty picnic fare by Kimpton’s award-winning chefs and available for purchase at each hotel.

The three-speed European-inspired street cruisers, with their appealing blend of classic design and modern, vibrant hues, make it fun to go out for a spin -- whether a novice or expert cyclist.

“Public is a perfect partner for us because we both share the belief that design matters in everyday life and that the urban biking experience is one of the best ways to explore a city,” DeFrino said. “They’re a boutique San Francisco–based company, like us. They liked our brand, they saw the affiliation, and we designed a bike together and every hotel purchased at least two of them.”

One of the reasons Kimpton chose Public bikes is because they’re really easy to ride and they’re safe and durable, he said.

“Biking is taking over in urban centers across the globe as a sensible way to get around town and explore new places,” said DeFrino. “Biking treads lightly on the planet, which we care a great deal about. It’s fun and it gets the blood pumping too. Public is a perfect partner for us because we both share the impassioned belief that design matters in everyday life and that the urban biking experience is one of the best ways to explore a city.”

To accompany the new partnership, Kimpton is also putting a spin on picnics, offering custom baskets with picnic fare created by the chefs of its restaurants and offered in the following themes: light and healthy, romantic shareables, and local flair.

Each basket will be inspired by the location and will feature locally sourced goodies tucked into a basket or backpack that is easily transported on the Kimpton Public bike. Picnic dining options will be available at every hotel and available for purchase through the concierge.

Kimpton hotels across the country are rolling out a variety of two-wheel offerings and packages making it even easier for guests to experience their cityscapes by bike.

At Kimpton’s Hotel Monaco in Washingon, guest can “Bike with the GM” in a program developed by hotel General Manager Ed Virtue, an avid biker who rides over 30 miles to work by bike. The program features a variety of offerings including “Ed’s top 25 rides under 25 miles,” “Race the GM” and  “Bike with the GM” Wednesdays.

At Kimpton’s Canary Hotel in Santa Barbara, guests are provided with self-guided ways to sip in the city and the shore. Guests can casually explore the collection of local tasting rooms on the Santa Barbara Urban Wine Trail from the seat of a Kimpton Public bike.