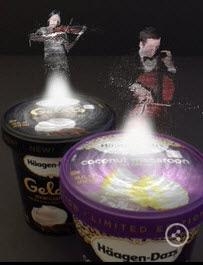 Haagen-Dazs has launched a "Concerto Timer" app that entertains brand fans while they wait for the two minutes needed to let their Haagen-Dazs ice cream soften slightly (or "temper"), to reach its full consistency and flavor.

The app, available free on Apple's iTunes store, is the first iOS mobile app to integrate 3D Kinect technology and video data -- delivering a more nuanced and fluid-motion augmented reality experience (versus the limited, robotic range of motion delivered by flat video or low-polygon 3D objects in standard AR), according to Haagen-Dazs.

After downloading the app, a user points the iPhone camera and aligns the dotted line guide with the lid of any Haagen-Dazs ice cream carton. Recognizing the visual of the lid, the app launches a two-minute virtual violin performance of Bach Inventions No. 14. The addition of a second carton reveals a cellist accompanying the violinist in a classic duet.

For every download of the app, Haagen-Dazs will donate $5 to honey bee research at the University of California Davis, for a total donation up to $75,000. Honey bee colonies, which are responsible for one third of the world’s food supply, are dying at an alarming rate.