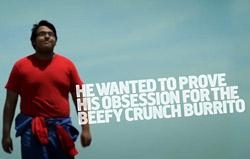 Taco Bell recently announced that it will release the next Doritos Locos Taco flavor on Aug. 22, but it will do it on social media. Nick Tran, Taco Bell's social media lead, said that like the reaction from media across the Web, the flavor will heat up consumers' tastebuds. Speculation puts the flavor at Flamas.

The latest hot taste will join nacho cheese and cool ranch flavors. Tran said combining tacos with Doritos flavors continues to spark renewed interest for the brand. Consumers who had not eaten at the restaurant for years connected with the brand through the taste of their favorite chip growing up, he said. It's about integrating product development with social media to make that connection.

Tran said Taco Bell's social media goal focuses on building friendships through YouTube, Facebook, Twitter, Instagram, and other social sites. One brand advocate expressed his obsession for the product by skydiving for a burrito, while another got a tattoo. The videos on YouTube demonstrate the significant attachment to the brand.

Waze, the crowdsourced navigation app now owned by Google, supported Taco Bell's mobile campaign that sent special offers to consumers while in the vicinity of a restaurant. Only when a driver came to a complete stop did the Taco Bell pop-up message promote a location relative to the driver's route. A combination of social responses and location information gives Google the ability to not only process traffic speeds, but to serve local ads.

The Taco Bell brand supports parent company YUM's more than 39,000 restaurants, of which 75% are operated by franchisees and unconsolidated affiliates; 20%, by the company' and 5% by licensees, according to the company's most recent 10-Q United States Securities and Exchange Commission filing.