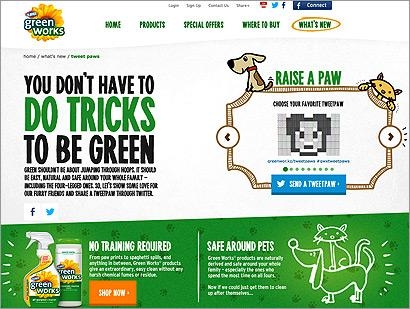 It's National Dog Day, and if Clorox Green Works has its way, the Internet will be awash in TweetPaws before it comes to an end.

"You Don't Have to Do Tricks to Be Green" is the tagline in the latest installment of an “always on” digital campaign from agency Critical Mass. It's all part of this year's relaunch of the environmentally friendly cleaning products focused on getting the word out through digital means that green should be for all.

“Send a Tweetpaw” invites one to share the love by tweeting out a custom ASCII-text with the hashtag #gwxtweetpaws to celebrate one's furry friends.

Leading into Monday, Clorox was actively planting the idea by tweeting out paws to celebs such as Oprah, Martha Stewart and Ed Begley, Jr. Blogger outreach is intended to result in a crescendo of Tweetpaws sent out in conjunction with the day, according to Elizabeth Fitzgerald, of PR agency Current in San Francisco.

“We're really trying to overcome a lot of the emotional hurdles our research has found associated with green,” Rebecca Boston, Green Works digital and public relations strategist, tells Marketing Daily. “A lot of people feel overwhelmed by it.”

The “always on” campaign was designed to communicate that green is not something for the elite few – rather it is affordable and accessible to anyone who cleans, and it really works. You don't have to be perfect to be green.

Animated banners in the campaign: “You Don’t Have to Be a Lightweight to be Green” with a green boxing glove punching the screen have run since July on lifestyle Web sites in the AOL network and on celebrity gossip properties. The product's target is women ages 18-45 for whom this is their first foray into green cleaners.

Since introducing the campaign in January, the Green Works Web site has experienced a 50% increase in time spent there, according to Boston. In addition, there has been a 64% increase in total engagement on Green Works’ owned digital platforms on Facebook and Twitter. A YouTube channel features Green Housewives, a parody on people who turn green into a status symbol.

Since January, online conversations have doubled about Green Works and conversation is 99% favorable, Boston adds.

Green Works safety around pets messaging has also been placed in the pet care aisles at stores, and Clorox may explore that channel as a merchandising option.

The efforts by Green Works are intended to reverse a $21 million sales decline between 2009 and 2012, as measured by IRI.