Honda's Roar To Save Outdoor Cinema 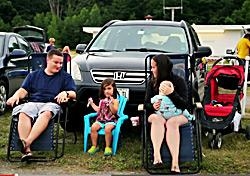 While some experiences are intended to rock your world, drive-in movie theaters simply want to create a feeling of community, similar to online social networks. Many kids can't fathom the feeling -- an outdoor gathering where people would share time and ideas in the real world.

The last few drive-in movie theaters near my home in Orange Country, Calif. closed years ago. Honda wants to save the remaining ones throughout the United States.

Honda counts 368 outdoor cinemas left in the U.S. -- and all must transition from celluloid to digital by the end of the year or shut down. So Honda launched Project Drive-In, a campaign with a dedicated Web site, YouTube page, Facebook page, Tumblr page, and Twitter account.

The campaign focuses on preserving the place where automotive and cinema come together. In California, drive-ins closed because owners got greedy as land prices skyrocketed. This morning I googled "drive-in movie theater near me" and found that the closest one was in Torrance, Calif., Los Angeles County.

A digital projector these days runs about $80,000, according to the video. Honda wants consumers to spread the word through social media. The company will donate five digital projectors, but asks people to vote on where they go. The carmaker also asks consumers to contribute to the Project Drive-In fund, and take a pledge to visit one this year.

I remember going to the drive-in with friends. Sometimes you would see people climb out from the trunk of a car after it drove through with passengers who paid to get in. We'd arrive early, goof off until the sun went down, and try to figure out the best speaker for sound to hang on the car window. In later years, the sound-system technology changed to short-wave, allowing car radios to pick up the audio.

When was the last time you visited a movie drive-in, and what's your most memorable experience? I haven't been in years.