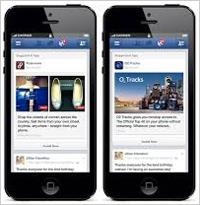 Fully launched less than a year ago, Facebook's app installed ads have proven a hit with developers and a plus for the social network's rapidly growing mobile ad revenues. Earlier this year, Facebook said about 40% of the top-grossing iOS and Android apps were using the format that allows users to download apps from within the mobile units.

To that end, it's rolling out a solution for clients that will automatically optimize bids and allocate budgets based on how each creative and target audience performs against revenue goals rather than just cost-per-install (CPI).

“Most developers give their apps away for free and offer premium paid content throughout the experience, so the notion of optimizing to a "cost per install" doesn't always make sense,” said Andrew McDermott, Spruce Media’s vice president of product. By optimizing ad buys to connect with those most likely to make an in-app purchase within a particular app, the company aims to boost return on investment for developers and publishers.

To provide the interaction data behind its optimization of app install ads, Spruce is partnering with a group of analytics firms, including Apsalar, Criteo’s AD-X, Adeven and Kochava. Targeting can be refined to better reach audiences based on various actions including virtual goods purchases, friend invites, subscriptions and buying of real-world products, according to McDermott.

Through its analytics partners, Spruce will offer its optimization service as a turnkey product to large app developers, such as CBS, GREE, Hipmunk, Supercell and Warner Bros. Eventually, it will be available through other mobile analytics platforms as well.

Developers can already use tools like Facebook’s Power Editor to tweak app install ads to test different creative against different demographics to see what performs best. But McDermott suggested that Spruce’s new offering will help streamline the process and focus more on encouraging post-install actions.

With 40% of its business now coming through mobile, it’s not surprising that the company is expanding services to run mobile advertising on Facebook. The social network itself reported that 41% of its ad revenue in the second quarter came on the mobile side. That figure is expected to surpass 50% by the fourth quarter, according to a JP Morgan forecast last week.

Mobile app marketing costs overall are on the rise. The cost to acquire a loyal user (one who opens an app at least three times a month) jumped 20% to $1.80 in July from $1.50 in June, while download volume was up slightly, according to the latest figures from mobile app marketing firm Fiksu.

The company attributed the increasing cost in part to growing demand for Facebook’s app install ads. Spruce previously reported that the CPI for app install ads on Facebook in the second quarter rose to $1.67 from $1.57 in the prior quarter.