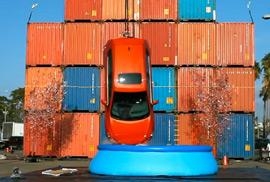 Since launching the Sonic two years ago, Chevrolet has the focus on social, with traditional media serving as the caboose for creative that launched first online. Annalisa Bluhm, Chevrolet communications manager, shared the company's strategy for the car as part of a social media panel at MediaPost's OMMA Global event this week.

She said the problem was that not only did people not know Sonic, they weren't thinking of Chevrolet as a car company. Even now it's an uphill climb: when she asked the audience how many had heard of the car, fewer than a handful of hands went up (one belonging to this reporter.) "People didn't know about Sonic," she said, even given the car’s strong reviews and upscale on-board amenities and technology. She noted that it wasn’t a huge help that its predecessor, the Aveo, was pretty much incognito, so the brand was launching a new vehicle and a new nameplate in a new category to a younger buyer.

"In pursuing this buyer, we had to change our marketing,” she said. “Our research showed [college students and graduates] have a sense of discovery, trust and engagement. They are grounded; maybe they can afford a vehicle, or they go halfsies with parents," she says. "But they will look at something brand new."

Thirty-three and under is also a very populous demographic, the largest generation in history, 80 million strong, and 30% bigger than Gen X. They are also brand agnostic, noted Bluhm. "More than one in three have kids, and 18% are Hispanic. And they don't feel 'warm fuzzies' for brands, including [import] auto brands. Here was a great opportunity to open up consideration."

The company is running a limited-edition color palette for the car but Bluhm says it's not about candy hues and decals. "Yes, personalization and color options are important, but they want to be taken seriously. This generation was raised during the credit crunch. So keeping it real became the framework of advertising, social, digital, etc., when it came to how to connect with this person."

A “journey of firsts" was the thematic basis of the two-year-old “Let’s Do This” campaign, whose first six months involved no TV at all, while social media dominated. Bluhm said a measure of the effectiveness of the campaign, whose creative focused on the car doing extreme "first"-type stunts of the kind YouTube generation would gravitate toward, was picked up by web magazines, online print, clips on entertainment tonight and other shows. "We made it relevant with no ads on TV, all digital."

Bluhm said the company also tapped into Millennial orientation around family connections. "Gen X needed to be independent and fierce and make their own way. This generation is more collective and inclusive." The company partnered with DailyBreak for a Chevy-brand program involving digital family postcards, with popular social-media voting, the winner of which won a Sonic. "We got 71,000 votes, a 24% conversion rate,” she said, adding that between the vehicle’s launch two years ago and the second quarter this year, sales of Sonic are up 230%, with 25% of owners of both Sonic and Cruze under the age of 21.