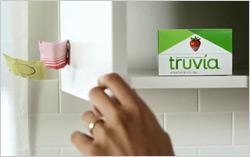 In a push to convince consumers to change their sweetener brand, Truvia's latest campaign includes a money-back promise on small boxes, and increased focus on consumer sampling and couponing.

The "risk-free" money-back offer, which applies only to purchases of 40-count boxes of Truvia, is appearing on stickers affixed to those boxes of Truvia nationwide.

It's also being promoted on retail point-of-sale materials, at the end of the brand's new TV spots, on its Web site and in other campaign elements.

The brand is also encouraging trial with a campaign on Facebook and Twitter. The campaign asks consumers to share how and when they made the switch to Truvia (#sweetswitch), and incentivizes existing fans with samples and coupons to encourage friends and family to also use the sweetener as part of their daily routines.

Truvia, launched by Cargill in 2008, is currently in 6 million of the 39 million total U.S. households that use sugar substitutes, and the brand is confident that it can boost its share through trial, because "people love it once they try it," Mark Brooks, global business director for Truvia Consumer Products, tells Marketing Daily.

He notes that consumers' choice of sweeteners is a "low-involvement decision." He means that sweeteners are one of those daily-use products that it's tough to get people to rethink, because we all tend to stick with our original choices on simple things in order to free up time for more important decisions.

Since changing routine goes to the heart of the challenge, in addition to incentivizing trial, the new campaign features TV spots that zero in on that daily choice of what sweetener goes into our coffee.

The first spot (clip shown above) takes place in a home kitchen. Stop-action animation is used to show packages of artificial sweetener preparing to "attack" a woman's morning cup of coffee -- until Truvia "saves the day."

Message: "Save your coffee from the artificial stuff. Switch to Truvia -- great tasting, zero-calorie sweetness from the stevia leaf. From nature, for sweetness. Love it or your money back."

A second spot, featuring a coffee-shop scenario, will also use the stop-motion technique and the same core messages.

In addition to airing nationally on network and cable TV, this creative (each has 30- and 15-second versions) will run on broadband. Truvia's spending on broadband has been increasing each year, according to Brooks.

This campaign's overall budget -- like each of the annual campaigns that have run since the brand's launch -- is roughly $30 million, he reports.

The campaign, which also includes public relations and newspaper FSIs, will run through the first quarter of 2014.

The team of agencies on the campaign includes Creature, Universal McCann, MARS Advertising, Periscope and RF|Binder.