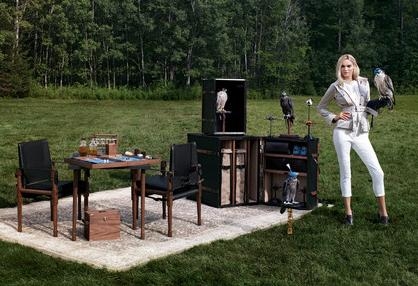 But in a twist, the Dallas-based retailer says it will now donate a portion of each fantasy gift to its the Heart of Neiman Marcus Foundation, dedicated to bringing enriching art experiences to youth around the country. "This year's gifts live up to the time-honored tradition of presenting our customers with the rare and unusual, while also incorporating our long legacy of always giving back," the company says in its release.

The company is also making shipping free this year.

Along with Macy's Thanksgiving Day Parade, Neiman's Christmas Book, a tradition that began  87 years ago as a loyalty device for its best customers, is one of the most-watched for holiday season kick-off events.

The entertainment package, billed as “a true audio- and video-phile's dream,” includes a 201-inch TV, which emerges from its “discreet, underground cache, telescoping upward and unfolding.” It also includes “technologically advanced speakers, subwoofers, and amplifiers that project unparalleled sound,” satellite TV and DVD management systems, and a built-in package of 300 movies and concerts, including the American Film Institute's 100 Most Thrilling American Films (for him, presumably) and the 100 Greatest Love Stories, for her. Two Apple iPad Minis serve as remotes. The $1.5 million price tag triggers a $10,000 donation.

But the diamond experience is by far the catalog’s swankiest. It starts with a jaunt to DeBeers’ London headquarters to claim -- and name -- a 25-carat rough-cut stone and have dinner with DeBeers’ CEO, served in the Tower of London after a private tour of the Crown Jewels. Then there's a tossed sail along the coast of Namibia, to see the mines it came from, and eventually, meetings with designers in New York to turn it into a ring.