Late Wednesday, news broke that Twitter and Comcast have reached a deal that will enable Twitter users to watch TV by clicking a “See It” button on messages about select Comcast-owned NBC shows. Users will also have the ability to control their Comcast DVR boxes from within the Twitter environment. Last week at Ad Week, Twitter made  several strong data driven points about Twitter users’ engagement during TV viewing, and, now, with this Comcast deal, Twitter can further prove to networks, and programmers that it can drive engagement during shows and potentially deliver new audience. 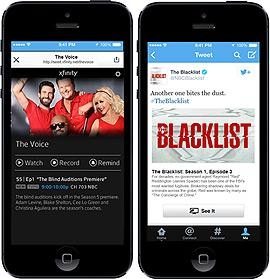 During Ad Week, “Second Screen” was certainly one of the belles of the ball, with several reports on the topic being released. For example, IPG’s Media Lab released a much-anticipated report on “The Second Screen Fallacy – What It All Really Means” in which it points out that “second screen is helping marketers recapture consumer attention in the living room and creating more targeted television.” Meanwhile, Twitter was showing data that 70% of tweets happen during program time, while 30% of tweets happen during commercial break. And even if TV viewers are not tweeting while viewing, a whopping 60% report they are looking at a secondary device during commercial breaks, according to the IPG Media Lab’s report.

2014 could be the start of the year of second screen. There are a lot of players in the space and from many of the first-look demos I have been privy to, the players in this white-hot space are growing up fast and rapidly iterating their offerings. And consolidation in the space has been rapid. Twitter alone has driven significant consolidation, just in the last 14 months by gobbling up BlueFin Labs, MoPub and Trendrr, and Apple acquired Matcha.tv. The Viggle acquisition by GetGlue seem like ancient news. And unless Facebook has some stealthy deals in the making, it sure seems like some of the best players in the second-screen space have been gobbled up.

One player that I think holds a lot of promise is Snappy.tv. Snappy delivers real-time video moments from live events and quickly syndicates that content across  several platforms while the video is still hot and fresh. It is the brain child of Mike Folgner, Ryan Cunningham and Stephen Weibel, formely of Jumpcut (acquired by Yahoo!). I’m expecting to see some other great services from Snappy – a service that Twitter has already partnered with for past programs.

An area of second screen that seems to not be getting as much attention is the cacophony of apps designed to enhance the second-screen experience, such as Zeebox, Viggle, Umami and even Shazam, which has expanded beyond music tagging. Shazam was the early lead in this space, and while I have a lot of heart for it, I think it needs to push more innovative solutions to the market to make it an indispensable utility for second screening. I expect to see a lot more players battling it out in this space.

Marketers waiting on the sidelines to see how things shake out would be smart to jump in the game as soon as possible. The second-screen space is quickly moving from emerging to mainstream. The good news is that there are lots of great companies, far too many to mention in this article, that are doing great things to help marketers gain more engagement in the living room and beyond. And if you’re a marketer still trying to figure out what all the fuss is about Twitter and what it could possibly offer in TV, you might want to rethink that one in short order.