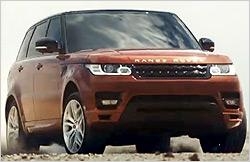 For Land Rover, action and adventure are marketing themes central to the "Driven to Another Level" effort for the 2014 Range Rover Sport. The campaign has to speak two languages at the same time: explain to consumers that its Range Rover Sport -- the company’s top seller -- has credibility as a sports car that looks like an SUV, and also passes muster in the heritage department. Emblematic of the bipartite marketing theme is the new “Race the Sun” digital campaign that allows people to "drive" the vehicle in both on-road and off-road situations based on a fictional narrative, and not based on user choice. If you participate, you have to experience the car and its features in both conditions, and thereby, get the full story.

The company has also been driving the fine line -- as well as efforts to connect with younger consumers -- via partnerships with publications like Outside and Men's Journal that involve branded content about entrepreneurs and adventurers.

Ken Bracht, communications manager at Land Rover North America, tells Marketing Daily that the action orientation makes sense because of the relative youth of the customer base within the premium SUV segment, and the competitive set, including Porsche Cayenne and BMW X5. "I think the real story with Range Rover Sport is extension of capability,” he says. “We have always been known for off-road prowess but because of the vehicle's aluminum light-weight body, which puts the car on an 800-pound diet, it opens up many other possibilities."

The initial Range Rover Sport launch in 2005 focused solely on the on-road performance side of the equation, pitching the vehicle as an urban sports crossover, more or less how Porsche and BMW pitch their respective vehicles. "The original ad was about exhilaration," says Bracht, adding that a follow-up campaign began with the vehicle breaking the time-trial record for the SUV category on the famous Pike’s Peak climb, one of the oldest time-trial driving events in the U.S.

"What we wanted to show is both the exhilaration and that link to heritage, and we did both with the drive up Pike's Peak," he says. The news was picked up by both general and enthusiast press. Then the company began running ads about the climb that showed the vehicle race up the paved road to the top and then continue down the other side on rough terrain.

"So, we are looking at the message a bit more holistically, including with media [strategy] around paid, owned and earned,” he says.

Bracht concedes that SUV owners, particularly owners of sports-minded SUVs, don't really take them off the road much. "But I think when you look at this competitive segment, it's not all off-road; people look at unexpected snowfall and storms, so that kind of ability is more relevant now."

"There is also something psychological to it around the desire to have a vehicle that is capable in all circumstances,” he says. “And it’s emotional; people love an adventurer's Swiss watch but are they going to take it 600 feet below the surface of the ocean? Not likely. But they identify with it.