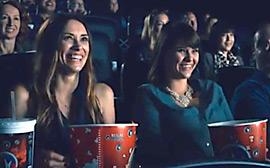 Regal Cinemas is using the stars of arguably the smallest screen to promote the big screen experience in a new digital campaign.

In a new branded series, “Date Night Fails,” the company cast Vine celebrities (all of whom have followings in the millions) to act out scenarios that demonstrate how cinema experiences can’t be duplicated at home. The videos feature Vine celeb Jason Nash acting as “Vince,” a guy who tries to impress his dates with movies in his home.

In one video, for instance, Vince and his date try to watch a movie via a streamed video service but spend most of the time waiting for the video to load. In another video, Vince constantly interrupts his roommate’s video date with spoilers about the movie they’re watching.

“The entire concept is around that joke,” Rebecca Coleman, founder of Something Massive, the agency that created the effort, tells Marketing Daily. “No matter how hard you try on your small screen, you can never re-create that experience of the theater.”

The videos have been released all at once on Regal Cinemas’ YouTube Channel. They will be promoted across the company’s social media platforms (including Facebook and Twitter), and the Vine celebrities (who include Brittany Furlan, KC James and Arielle Vandenberg) will also promote the videos through their own channels, Coleman says. (One promo from Nash had him saying he would take a horse to a movie — and dress as Michael Phelps — if 100,000 people liked his Vine.)

“There are people who have a large following [on Vine], and they have a rabid audience, and they’re slowly starting to be tapped by brands,” Coleman says. “These people produce so much content on a daily basis. They are content machines.”

Though there’s a possibility of the videos running in other channels (in-theaters, for instance), the company is opting for a predominantly digital run in a bid to meet moviegoers where they’re seeking out information, Coleman says.

“People are making their movie-going decisions online,” Coleman says. “If we’re going to be part of that decision-making funnel, we need to be a part of that mix.”