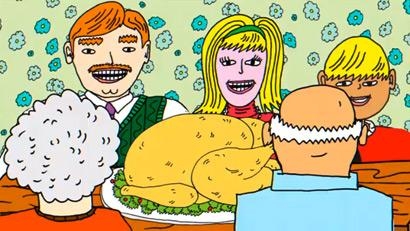 Century 21 has created a song and music video to celebrate the Thanksgiving turkey-induced haze.

The song, "Tryptophan Slow Jam,” is available on iTunes for download and is also being shared with its psychedelic music video on YouTube and Vimeo. Century 21 is promoting the video across its social channels, including Facebook and Twitter.

The brand also is encouraging consumers to share photos using the hashtag #Tryptophan as they’re recovering from their turkey dinner.

Century 21 will donate the proceeds for all “Tryptophan Slow Jam” downloads to its philanthropic partner, Easter Seals.

This is the brand’s first foray into the animation and music video sector, says Bev Thorne, Century 21 chief marketing officer, adding that the company has put more focus on capitalizing on pop culture events in recent months.

“Whether it’s a Facebook post with a message for Prince William and the Duchess of Cambridge about their expanding family and their need to upgrade to a bigger place after the birth of their son, or a video shared across our social media channels offering the President and Speaker of the House a central location for a fireside chat during the government shutdown, we look for opportunities to leverage iconic media opportunities to engage our customers in real time dialogue about life around us,” she says.

This campaign is an example of how the brand is engaging with consumers in smarter, bolder and faster ways, she says.

“For our brand, reaching home buyers and sellers at the point of consideration is critical, and real-time marketing enables us to do just that,” Thorne says.

According to a CMO.com study, consumers are 22% more likely to consider a brand as a result of real-time marketing.

“So when we plan our marketing activations, we are thinking about real-time tactics to wow consumers, particularly focusing on how we can tie the brand into breaking news and current conversations,” she says. “For this campaign in particular, we are hoping the ‘Tryptophan Slow Jam’ will become known as a great Thanksgiving rock anthem, as families are mellowing out after indulging in their holiday feasts.”

Mullen, Century 21’s agency of record for social media and PR, tries to evoke the warm, comfortable feeling of home in its social work for the brand, says Tim Cawley, SVP, group creative director at Mullen.

Cawley, a working songwriter, says he wrote the song in a trippy, 60s style and brought in outside musicians to work with his longtime Boston producer Andy Pinkham at Mortal Music to create the finished track.

As he was writing the song on a Saturday afternoon, Cawley got an email from an illustrator named Ana Benaroya.

“But it wasn't the standard robo-spam email from an artists' rep,” he says. “Ana actual wrote a human-to-human email. I checked out her site, full of rock posters and quirky animation, and decided it was a sign.”

Benaroya was hired that Monday, did the illustrations, and got them to Mullen's in-house animator Jaime Klein. Benaroya and Klein created the whole film, lobbing ideas back and forth, over the course of 10 days leading up the video's release.

“One of the most obvious examples of this feeling is when you're settled in on the couch, surrounded by friends and family, watching football on the couch after a big Thanksgiving dinner,” he says. “So we wanted to capture that emotion in a holiday song. After all, Christmas has its carols and sing-alongs. Why can't Thanksgiving have a signature anthem of its own?”